The World Economic Forum’s Annual Meeting of the Global Future Councils today hosted an enthralling discussion around the effect on jobs in the age of the Fourth Industrial Revolution, which drew polarised opinions from Massachusetts Institute of Technology and University College London experts.

Andrew McAfee, MIT’s principal research scientist and co-director and co-founder of the MIT initiative on the digital economy, was of the belief that capitalism has been largely beneficial to the world, and that innovation will hold the answers in re-employing those who are displaced by technology. 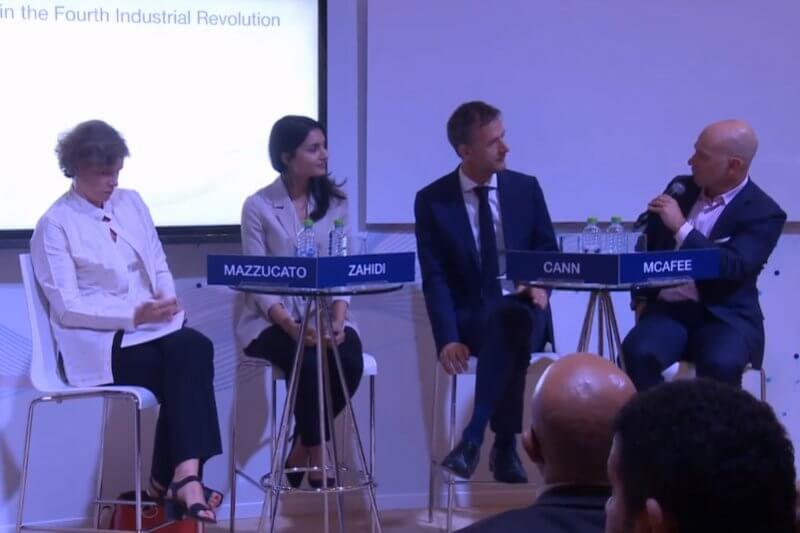 UCL’s professor of economics of innovation and public value Mariana Mazzucato took the view that a “top-down” approach to economics is short-changing citizens in an era where GDP levels are at an all-time high.

“The best response is to let innovators and entrepreneurs create jobs,” McAfee said. “Over 200 years of the industrial era shows that technological change creates jobs. Even in countries with high levels of government employment such as France, where the number is at 25%, generally the huge majority of jobs comes from the private sector. We need robust educational systems to deliver the research that people need. We need excellent infrastructure and for governments to support basic research.”

“The basic playbook [for the future] is clear, don’t see need to tear it up and rewrite it.

“There are something like 3 million people in the US who earn a living from driving. What happens if that’s automated? There are also roughly 1.5 million layoffs every month in the US. So yes, we could absorb losses. The problem is re-entering these people into the labour force after automation comes. An important area that research needs to tackle is this reintegration.”

“I dismay that the US is turning away from innovation when countries like the UAE and China are looking at AI development and strategies.

Mazzucato agreed that technological change will not create mass employment, but added that the world’s current economic systems may not be suited to a world that needs investment in innovation in order to create new jobs. “Economist David Ricardo wrote in 1831 that mechanisation of the time was taking jobs from people,” she said. “He then saw however, that there was creative destruction in taking jobs, which were reappearing due to reinvestment.

“Since the 1980s, we’ve lived in a world where corporate structures are about maximising shareholder value. Over $3 trillion has been used to buy back shares in the last 10 years and that hurts jobs and skills. This is the elephant in the room. Governments are there to fix market failures but that doesn’t help us to understand where technology changes are coming from.

“The profit levels of GDP worldwide are at record levels. The rewards should be shared collectively through a capitalist agenda that admits where they came from. Citizens have invested through taxes – Tesla was initially funded through $465 million of a taxpayer-funded loan. The VC industry is unwilling to fund a lot of this. They want an IPO or buyout in 3-5 years.”

McAfee disagreed, however. “I’ve heard about financialisation and shareholder value being huge problems for years, but I have a problem dealing with that claim, he said. “In the US, we’ve had no problems with jobs – we only a problem in terms of quality, not quantity.

“The world’s little guys have become the biggest beneficiaries of capitalism. The average person’s income has increased by more than 50% since 1988. The exception is the middle class and lower middle class in developed countries.”

Mazzucato went on to highlight the ways that technology giants have taken control of citizen data, and said that this was symbolic of the ways that capitalism has failed the public. “We need to change our relationship with data,” she said. “How would things look if data was run by an organisation representing the people, with a governance structure which companies have to pay into? It would be a different kind of relationship.

“Data has been generated collectively – how is it allowed to be stored with a company? The way we’ve allowed platform capitalism to develop has come from a top-down way of thinking.”