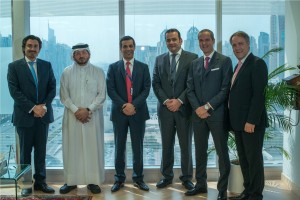 Ericsson last week announced that it had a struck a deal with Kuwait’s Wataniya Telecom to upgrade the telco’s existing 2G and 3G networks.

Aiming to meet the growing demand for 3G services in Kuwait, Ericsson will add WCDMA/HSPA capability on 900 MHz and LTE capability on the 1800 MHz band, Ericsson said in a joint statement with Wataniya.

This will result in higher connectivity speeds for Wataniya subscribers, the statement said.

Describing the upgrade as a “transformation”, the two firms said it will prepare the network for future growth, which is being created by a strong uptake of smartphones and other handheld, data-enabled devices.

Anders Lindblad, President, Ericsson Middle East, said that Watinyia was “demonstrating how simple it is for operators to upgrade their existing infrastructure effectively,” adding that the two firms were working to develop a “networked society” in Kuwait.

This deal is the latest in what has become a strong relationship between Ericsson and Watiniya over the past few years. Past projects include a network-wide upgrade to Wataniya’s GSM infrastructure, and an upgrade to the teclo’s charging and billing system.