Power, price and pretty looks – we tried out Oppo’s latest smartphone and found out why these three elements make F9 a good buy.

Oppo F9 is the latest smartphone that falls under the company’s selfie-centric F-series lineup.

The smartphone isn’t quite as exciting on the spec sheet. However, it does have a lot of notable design elements that will make you do a double take and wonder if it really is a mid-range device rather than a premium one. 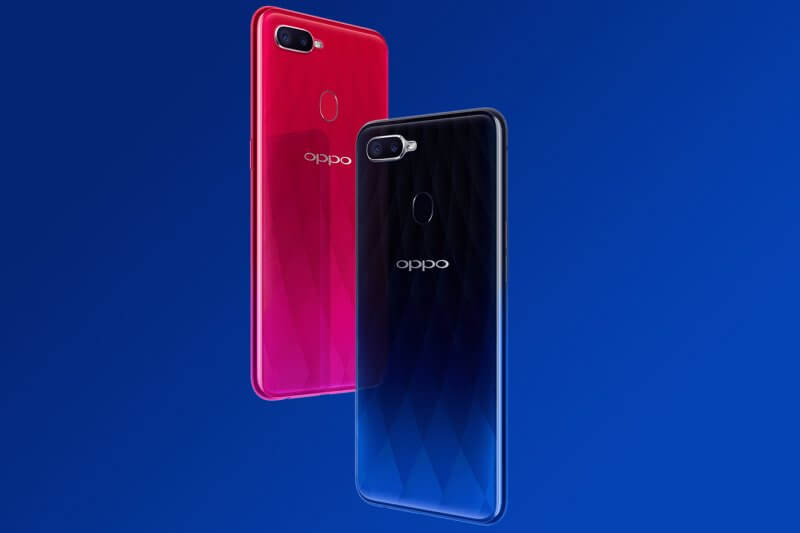 Among the eye-catching aesthetic aspects of the F9 is its gradient colour scheme – it comes in Sunrise Red, Twilight Blue and Starry Purple. We got a chance to review the Twilight Blue model, which has a unique diamond pattern on the back with colours that fade from black to blue. It has a glossy texture which makes keeping the device smudge-free a bit of a challenge. But thankfully Oppo ships with a transparent phone case in the box.

Another noteworthy design accent the F9 has is the waterdrop notch, which is located on top of the full HD+ 6.3-inch LCD and cleverly houses a front camera, proximity sensor and hides the speaker grille just above it. Meanwhile, the screen is made of Corning Gorilla Glass 6 and displays sharp colours and is bright enough to see in direct sunlight.

At the bottom, you’ll find the 3.5mm headphone jack, and a microUSB charging port. It is a bit disappointing that it’s not USB-C instead, but for a mid-range phone, this is not surprising.

As part of Oppo’s selfie-centric smartphone family, the cameras are key ingredients for the F9. The device sports a 16MP primary shooter with f/1.8 aperture and a secondary 2MP sensor for depth and portrait mode effects. It comes with the usual camera features such as time-lapse, slow-motion video, stickers, AI beauty mode, and Google Lens integration. The main camera’s performance is fairly good and at par with most of the mid-range smartphones. The LED flash, as well as the fingerprint sensor, can be found at the rear of the device along with the dual-camera setup.

If you’re a fan of taking selfies, the F9’s 25MP front camera won’t disappoint. It captures detailed selfies even with the AI-enabled beauty feature turned off.

The Oppo F9 is powered by a MediaTek Helio P60 processor and either 4GB or 6GB of RAM. It sports a 64GB internal storage, which is further expandable up to 256GB using a microSD card. Most of the time the device performed fluidly. It swiftly launched applications and navigating through the interface, browsing the web, and other typical smartphone activities were smooth. It runs Android 8.1 Oreo and Oppo’s proprietary ColorOS. The UI makes the device feel fresh – especially if you’ve never used an Oppo device before. Bloatware is thankfully kept to a minimum.

The device packs a 3,500mAh battery under the hood, which easily lasts a full day. The handset supports VOOC Flash Charge, which is the company’s proprietary fast-charging technology. VOOC can charge the device up to 50 percent in just over 30 minutes, which is impressive. However, this also means that you need to have the cable and adapter on hand if you want to benefit from this fast charging tech.

Overall, the Oppo F9 offers plenty of modern smartphone features at an affordable price of AED 1249. If you’re looking for something trendy that supports fundamental mobile tasks, the F9 could be a good option for you.