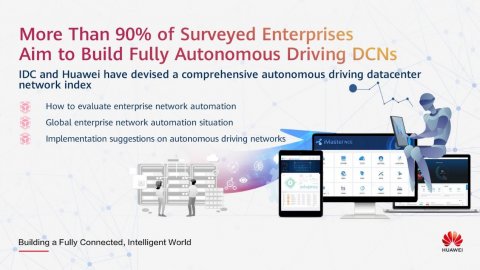 IDC asked respondents to identify what was driving their need for data centre network automation. At the top of the list was application and business continuity and resilience, which was cited by about 45% of respondents. IDC believes this result was accentuated by the COVID-19 pandemic, which has caused organisations to prioritise business resilience and continuity as they focus on keeping the digital lights on during an unforeseen crisis.

Leon Wang, President of Huawei Data Center Network Domain, said, “We highly appreciate the survey and research of IDC. The release of the data center network index is very important and points out the direction for the development of the entire industry. Although data center networks of different enterprises have different autonomous driving levels, customers in various industries are actively embracing automation to achieve service agility and reliability while reducing OPEX and CAPEX. Huawei will continue to invest in technologies, applications, and ecosystems, continuously improve the data center network autonomous driving level, and maintain its leadership position. Huawei will help enterprises build autonomous network systems and accelerate digital transformation”.