According to the scientists and engineers at the Centre of Automotive Management, a scientific institute for empirical automotive and mobility research at the University of Applied Sciences in Bergisch Gladbach (Germany), the Porsche Taycan is “the most important innovation driver in the global automotive market.”

In the Automotive INNOVATIONS Report published in conjunction with PricewaterhouseCoopers (PwC), experts listed 27 technological innovations in the Porsche Taycan, 13 of which are world firsts. Porsche’s pioneering new electric sports car was named the world’s most technologically advanced passenger vehicle, beating 250 production vehicles in the evaluation process.

Porsche has a well-earned reputation for technological leadership, driven by their eternal quest to build the perfect sports car. With the launch of the new Taycan, Porsche presents its first ever fully electric model, setting another important milestone for the successful future of the company. 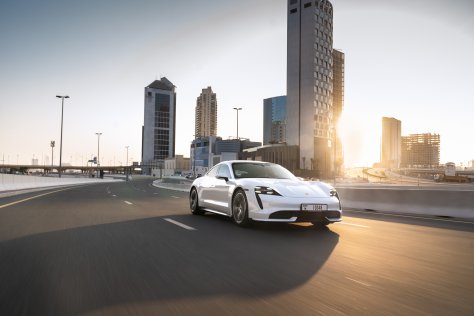 From the outset, the sports car manufacturer set out to prove that one does not have to compromise on performance when choosing an electric car. The first models to be made available in the series are the Taycan 4S, Taycan Turbo and Taycan Turbo S, which are among the most powerful production models in today’s Porsche range.

The Turbo S can generate up to 560 kW (761 PS) overboost power in combination with Launch Control, and the Taycan Turbo up to 500 kW (680 PS). The Taycan Turbo S accelerates from zero to 100 km/h in a mere 2.8 seconds, the same time as the 911 GT2 RS. The Taycan Turbo completes this sprint in 3.2 seconds, with the top speed of both all-wheel-drive models is limited to 260 km/h.

Sci-fi worthy styling aside, it’s when you look beneath the surface of the Porsche Taycan that it really starts to impress. Extensive thought has been given to every single element of this sports EV, right down to its shape. With a drag coefficient of just 0.22, the aerodynamically optimised exterior lines make a significant contribution to low energy consumption, thus improving its range.

A Sports Car That Thinks

An area where EVs often demonstrate a weakness is in power consumption during high-performance driving. Consistent rapid acceleration is usually one of the fastest ways to drain the batteries, but Porsche has addressed this challenge with the first-ever two-speed transmission featured in an EV.

A special innovation in these electric motors is the “hairpin” winding of the stator coils, which makes it possible to incorporate more copper in the stator, increasing power output and torque while maintaining the same component volume. This gives the Taycan’s electric motors the highest power density of all the electric powertrains on the market today. 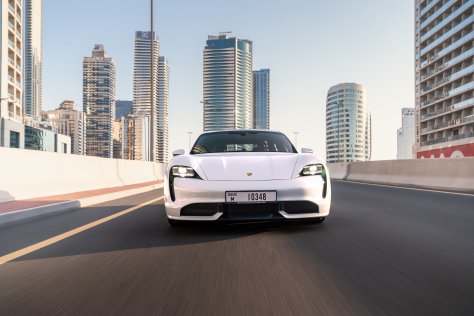 In internal combustion engine vehicles, excess kinetic energy at the brakes is converted into heat during deceleration. With electric vehicles, it is possible to recover a large portion of this kinetic energy to recharge the battery using the electric motors as generators during braking.

For a glimpse into the future of electromobility, you need only look at the Porsche Taycan today.