The project called, Digital Coach project, is in line with the UAE Strategy for artificial intelligence (AI) and technology is the first-of-its-kind in training drivers worldwide.

This robot is configured to train both novice and professional drivers in need of further exposure to traffic awareness. 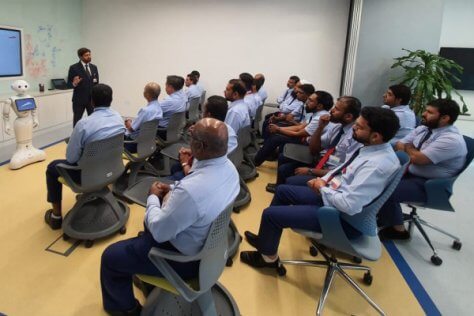 It is loaded with all the information related to training materials and can respond to all the relevant queries trainee drivers might raise during theoretical lectures.

According to the WAM report, Dubai RTA’s Digital Coach is fitted with technologies that enables it to run interactive training that keeps drivers focused. The digital coach will be used as an advanced training tool in delivering drivers training modules. Accordingly, it will contribute to refining the skills of drivers and improving training deliverables.

The technology contributes to achieving RTA’s vision and several strategic objectives. It marks an unprecedented breakthrough for RTA and Dubai worldwide by inaugurating a digital coach in the field of transport and using AI technology to improve the qualification and quality of trainees in the transport sector.

RTA plans to upgrade the use of this robot to make it capable of handling future improvements in training materials.

The UAE Strategy for Artificial Intelligence is a part of the nation’s Centennial 2071 objectives. Launched by UAE vice president and prime minister, and ruler of Dubai Sheikh Mohammed Bin Rashid Al Maktoum in 2017, the initiative is aimed at positioning Dubai as a major hub for developing AI techniques and legislation.