As I recently noted, much of the IT industry detests Amazon Web Services, with VMware in the lead. In my own discussions within the industry, it’s obvious that AWS is regarded with a mixture of astonishment, loathing and fear.

In fact, looking at these kind of results, terror might not be too strong a word:

(I’ll give only a fleeting mention to the semi-hysterical rant by top VMware management at a recent partner event.)
One can understand the panic of the traditional systems and software vendors when they see AWS headlines such as these:

Combining these predictions, AWS could represent $80 billion less spent with IT enterprise vendors in 2020, with, of course, reduced revenues from now until then. Over the next seven years, the industry might be looking at $100 billion in “lost” revenue. That’s big.

AWS appears to be growing like gangbusters
This came to mind when Amazon announced that its S3 service has just reached 2 trillion objects, just 10 months after it reached 1 trillion objects in storage.

You can see from the chart below that after a slight slowdown in 2012, S3 growth appears to be moving to near-vertical levels. By my calculations, S3 is now at a 120 percent annual growth rate, which may be accelerating.

Amazon S3 is growing at a rate that’s hard to comprehend.

I got to wondering: How much revenue does that represent for S3? The main variables are how large the objects are and how much total storage each account has, since the price per GB of S3 storage for each account declines with total storage volume. As a rough estimate for S3 cost per GB, one can use $1/GB/year, while recognizing there is certainly some variability around that number.

So, to see what S3 numbers might look like, I put together this chart to calculate how much revenue S3 could generating at a 2 trillion object scale:

Obviously, by far the biggest factor in estimating S3 revenues is the size of the average object. Of course, there are a lot of 13 KB JSON files in S3-meaning many S3 objects are quite small. On the other hand, there are plenty of 2 MB PowerPoint files stored in S3 as well. Lots of video files, too, which can be hundreds of megabytes in size. I think, as a rough estimate, 100 KB is a good number to use for the average S3 object size, which implies that S3 provides around $200 million annual revenue today.

I also reviewed some AWS usage stats developed by Cloudyn, one of the new breed of utilisation and cost tracking companies that have sprung up to help companies manage public cloud computing use. The data Cloudyn provided covered a one-month period for around 400 companies, made up of a mix of large and small companies.

Somewhat surprisingly, S3 accounted for only 7 percent of the AWS cost for this sample set. If you use the calculated S3 revenue number of $200 million per year, and multiply that $200 million times 15, or the rough inverse of 7 percent, it would make AWS revenues around $3.4 billion, consistent with the Citi estimate. Given the S3 growth rate, that would also make the Bernstein and Baird projections not unreasonable at all.

From the revenue side, it’s easy to see why the entire IT industry is lining up against AWS. It’s growing like gangbusters, and every dollar it generates takes three or four away from incumbent vendors. This is way worse than a zero-sum game.

But what does running AWS cost?
I’ve heard some vendors complain that Amazon is subsidizing its AWS service, with an implication that it’s not playing fair – that Amazon is accepting unfairly low margins, or even taking large losses, to promote AWS. I don’t know about the fair-play bit, but it’s an interesting question about how much Amazon might be spending on AWS.

Amazon is notoriously secretive about many details of AWS, but Amazon speakers frequently drop a tantalising hint: “Every day, Amazon installs as much computing capacity in AWS as it used to run all of Amazon in 2002, when it was a $3.9 billion company.”

I found that intriguing and decided to look into it a bit further. The 2003 Amazon annual report shows that, in 2002, Amazon invested $216 million in “technology and content” expenses. Obviously, the cost for a given amount of computing capacity today is far cheaper than it was in 2002. By my estimate, the five generations of Moore’s Law that have occurred since 2002 mean that the same amount of computing capacity that cost $216 million then would only cost $6.5 million today.

Of course, the ambiguity of “as much computing capacity” means it’s difficult to know precisely what would be included in that number. Is it just 2002 investment, or is it the total investment for multiple years-since, after all, computing capacity installed in 2000 and 2001 would still have been working in 2002, assuming a three-year depreciation cycle?

Nevertheless, if one uses only the 2002 investment figure, and today’s Moore’s Law-cheapened capacity costs, the total yearly investment to install that capacity each and every day would total $2.37 billion dollars. (If Amazon only counts working days, which I estimate at around 250, the number would be $1.625 billion.)

Obviously, Amazon spends plenty of money on technology for the other parts of its business, so not all of that $4.5 billion would be applied to AWS-although, interestingly enough, it runs all its ecommerce Web servers in AWS. Nevertheless, an investment level of somewhere around $6.5 million per day is consistent with its public pronouncements about how much Amazon is investing in AWS, as well as within the numbers contained in its current financial reports.

Trying to buy and install $6.5 million worth of technology day in and day out sounds exhausting. And the challenge will only get more daunting as the AWS growth rate accelerates.

Amazon Web Services has room to grow – and it will
As for Amazon subsidising AWS and accepting subpar returns, that’s not immediately obvious from a set of numbers that pencils out at $3.4 billion revenue and $1.6 billion investment. Clearly, there are many other AWS costs, including personnel, travel and marketing, but the scale of the revenue and investment don’t shout unfair subsidization.

I think the issue is more that Amazon has figured out how to generate a marginal dollar of revenue at a far lower cost than the established vendors. The R.W. Baird analysis, which indicated that every AWS revenue dollar results in three or four lost dollars by established vendors, shows how much less efficient those vendors are than Amazon. Frankly, one doesn’t see any dramatic response on the horizon to Amazon’s efficiency, so the dynamic of every AWS revenue dollar displacing multiple vendor dollars is likely to continue into the foreseeable future.

After running through these calculations, I was left with one question: How big will AWS have to be in order to be considered a credible enterprise offering?

At the current rate of growth, if you accept Citi’s estimate of AWS’s current size, it will surpass VMware total revenues sometime next year. Is that big enough? Or how about two years later when, according to Baird, AWS will be a $10 billion business? I think it’s fair to say that Amazon is nowhere near done disrupting the IT industry.

Bernard Golden is the vice president of Enterprise Solutions for Enstratius Networks, a cloud management software company. He is the author of three books on virtualisation and cloud computing, including Virtualization for Dummies. 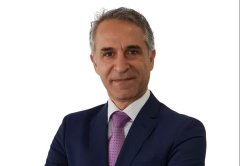