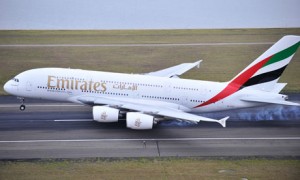 Hop on an Emirates flight in Dubai and get up to cruising altitude. You realise you forgot to tell your assistant to make some crucial plans when you arrive at your destination. No problem: Just take out your cell phone and make a quick phone call.

Say what? Emirates is one of just a handful of airlines that let passengers make calls in flight, not through a funky seat-back phone (though the airline offers those, too), but through a system that relays regular wireless phone calls through a satellite and back down to the ground. Provided by either OnAir orAeroMobile, the service is available on 300 Emirates flights every day.

And a single plane has yet to crash because of it.

The technology behind in-flight phone calls isn’t all that complicated. Calls are handled by a picocell on the plane, which is basically the same technology behind Gogo Inflight Internet, which relays Wi-Fi signals to ground-based cell towers, and which is now included on 1,600 commercial aircraft.

If Gogo is safe, what’s the problem with making a voice call in flight?

The rules banning phones in flight date back to 1991, and little has changed since they were enacted. While both the FAA and the FCC have periodically probed the issue of whether in-flight cell phone use might be safe, these efforts have never gotten very far. The FCC generally cites “not enough information” as the reason for leaving the ban intact, but the more likely culprit is actually pressure from the public to leave it in place. In general, consumers are fearful that their “peaceful” flight will suddenly become as noisy as a soccer match with all those phone calls being made. Plus, there’s still plenty of latent hysteria out there that cell phones are going to crash planes.

Recent news reports are fanning those flames, particularly a 2011 case in which a commercial jet went off course and found its compasses weren’t reading accurately… until a passenger shut off his iPhone, after which the problem went away. The Boeing 787 Dreamliner’s woes also have passengers nervous, and every time a celebrity interrupts a flight with a tantrum over having to shut off his phone, citizen umbrage only gets stronger.

And sure enough, an increasing number of cases of malfunctions due to suspected interference from consumer electronics are being reported to the FAA. Delta reported 27 of these from 2010 to 2012, though in none of them were crews able to verify that iPhones and Galaxys were the culprits. Nonetheless, a new FAA committee is now investigating (again) whether or not to relax the current rules on which electronics can be used in flight and when, with recommendations due in July.

But all of this makes me wonder, if cell phones really interfere with aeroplanes navigation systems, why are incidents so rare? I am literally never on a flight where someone in my row hasn’t had their phone turned on for the entire trip. Why don’t planes veer off course every day? And why are aeroplanes so prone to this problem: Why don’t phones interfere with increasingly complicated terrestrial navigation systems? Are smartphones going to cause all those self-driving Google cars to go haywire and start running down schoolchildren?

I’m not expecting anything to change – even the industry cheerleaders at the Consumer Electronics Association report that only four of 10 airline passengers say they want to be able to use electronic devices in all phases of a flight, which means that 60 percent of fliers are okay with the rules around requiring everything to be shut off during take-off and landing. (The CEA didn’t even ask about using cell phones for voice calls, but one study taken just last month found that a whopping 80 percent of fliers still do not want people to be able to make calls in the air).

That’s fine with me. I’d be happy enough with being able to use a phone or tablet (in airplane mode, even) during take-off and landing. For business travelers, this is arguably a bigger deal. The strange rules around turning electronic devices off during take-off and landing put a bigger drain on productivity than the voice-call ban. If you think about it, all the time wasted while gadget use is disallowed results in up to an hour of downtime on each flight, and no one has shown any issue with devices in airplane mode impacting cockpit instrumentation.

Frankly, I’d rather be working while we’re sitting on the tarmac. What else am I going to do – read a magazine?