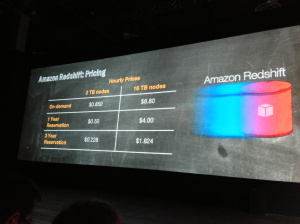 Adding to an already considerable set of cloud IT offerings, Amazon has introduced a hosted data warehouse service called Redshift, pitching it as a lower-cost alternative to on-premise data warehouse deployments.

“Anyone who has used a traditional old-guard data warehouse solution knows that it is really expensive and complicated to manage,” said Andy Jassy, Senior Vice President of Amazon Web services, who announced the new offering at the company’s AWS re: Invent conference being held this week in Las Vegas.

In contrast, Redshift “is about the tenth of a cost of a traditional data warehouse,” Jassy said. “It automates the deployment and administration and works with popular business intelligence tools.”

A limited preview version of the service is now available. Amazon said it will launch the service commercially in early 2013.

Redshift works with a number of business intelligence (BI) applications, including software packages from Microstrategy, SAP, IBM and Jaspersoft. Users would use one of these BI packages to parse data in the Amazon cloud, using PostgreSQL drivers along with ODBC (Open Database Connectivity) and JDBC (Java Database Connectivity) APIs.

Users can store up to 1.6 petabytes, in either 2 terabyte or 16 terabyte nodes, up to 100 nodes. The data will be stored in a columnar format so the “queries will be much faster,” Jassy said.

Amazon will offer the service on a pay-as-you-go billing basis, or for slightly less expensive rates by reserving the service ahead of time. Prices start at US$0.85 per hour for ad-hoc querying and decline from there for greater usage. On the whole, the service could cost as little as $1,000 per year per terabyte of data, compared to an average cost of $19,000 to $25,000 per terabyte per year to maintain data warehouse operations in-house, Jassy noted.

Amazon is not the only service offering data warehousing tools. Google also offers the capability to store large amounts of structured data for analysis through its BigQuery service. Recently, BI software provider Tableau Software released a connecter that would allow its customers to work with BigQuery through Tableau’s own software.

Redshift will join an increasing number of Amazon services, which as of last count numbered 158, according to Jassy. They include services for storage, computing tasks, databases, search, e-mail, building virtual clouds, content distribution, auto-scaling, caching and workload balancing.

“We want to enable to every imaginable work case to work with AWS,” Jassy said.