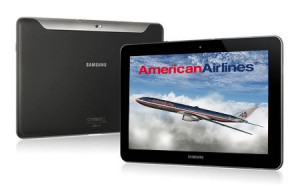 American Airlines said it plans to purchase about 17,000 first-generation Samsung Galaxy Note devices for use by cabin crew members during flights.

Flight attendants will use the combination smartphone/tablet to record passengers’ meal and beverage preferences, and to access information such as customer names, seat numbers and special assistance needs. The airline will begin deploying the devices later this year and expects to continue the rollout through mid-2013.

American decided to use Galaxy Notes after completing a pilot program in which 40 flight attendants tested several devices and gave feedback about their preferences.

According to the airline, the testers liked the Note’s thin design, its security features and its HD display. They also liked the fact that they could hold the device in one hand and easily slip it into a pocket.

American Airlines CIO Maya Leibman said the Note rollout is part of a corporate programme that includes pioneering new technologies “to build a new American and return to industry leadership.”

As part of this initiative, the airline will also expand the use of tablets in the cockpit during all phases of flights; American is the first commercial airline to receive FAA approval to do that.

Eventually, American hopes that crew members will be able to use tablets to give passengers timely information about connecting gates, flight delays and weather issues.