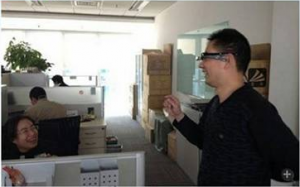 Chinese internet giant Baidu is also developing its own Google Glass-like device that will allow for hands-free Internet searches. But the company has yet to decide if the device will ever reach the market.

The device, called Baidu Eye, is under development and comes with a head-worn LCD screen, said company spokesman Kaiser Kuo on Wednesday. Users will be able to make voice commands or snap images that can then pull up information via Baidu’s search services, he added.

“We don’t believe search should be limited to text. You should be able to search with multiple inputs,” he said. “You can snap a picture of a building you’re looking at and bring up its data.”

A photo of Baidu Eye appeared on Chinese news outlets on Monday, showing a person wearing it. Ideally, developers would also contribute apps to the device, paving the way for new features, Kuo added.

But despite the product’s potential, Baidu is undecided on whether to one day commercialise the device, he said. “We’re still making a decision on taking it to the market,” he added.

It’s also unclear how long the Chinese company has been developing the computerised eyewear. But Baidu has been a major competitor with Google in China. The two companies famously clashed until 2010, when Google decided to partially exit the market following repeated disputes with the nation’s government over online censorship. Baidu now dominates China’s search space, with about a 70 percent market share, according to data analytics site CNZZ.com