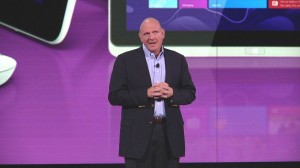 “We’re seeing preliminary demand well above where we were with Windows 7, which is gratifying,” he said. “We’re seeing retailers here in the United States and hardware manufacturers enthusiastic about the response.”

When Windows 8 went on sale Friday, there were lines at Microsoft Stores across the U.S., although many of those waiting said they were more interested in Surface, a Microsoft-developed tablet computer that went on sale the same day. Windows 8 is available both in stores and through online download.

The new OS brings touch to the desktop operating system.

“The demand for touch on all-in-ones and laptops, in addition to tablets, has been really quite astounding, and certainly the lines we’ve seen at the Microsoft Stores have been heartening,” Ballmer said.

Windows 8 features a redesigned desktop built around tiles, rectangular boxes that act as links to apps, services and information about friends. Windows Phone 8 features the same tiles, and Microsoft hopes that when consumers become familiar with the tiles, it will help to sell phones.