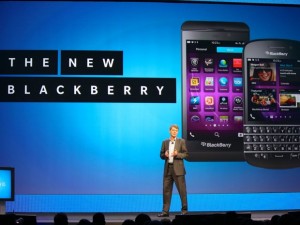 The newly rechristened BlackBerry has delivered on its promise to breathe new life into its aging, iconic product line for diehard fans, but faces an uphill battle against the iPhone and devices based on Google’s Android operating system.

At a New York launch event attended by hundreds of press and analysts, CEO Thorsten Heins underscored efforts to reignite the company by starting off his presentation with the announcement that the vendor would cast off its historic Research In Motion name and operate under the BlackBerry brand.

The two new devices debuting at the event — the touchscreen BlackBerry Z10 and a handset with a physical keyboard, the BlackBerry Q10 — were designed essentially from scratch around a new platform based on QNX, a real-time operating system the company acquired in 2010.

Key to both devices is the Hub, a messaging centre that integrates email with messages from social networks and the BlackBerry Messenger service, and the Flow user interface, designed to allow users to easily switch between apps without losing tasks that are already running.

“For current BlackBerry users this is a BlackBerry holiday; Santa Claus has come to town and his name is Thorsten Heins,” said Ramon Llamas, Research Manager for mobile phones at IDC.

“This is not your father’s BlackBerry — there is enough here to be fresh, bringing the platform into 2013, without alienating anyone,” Llamas said, speaking on the sidelines of the launch event.

BlackBerry has proved that its new platform is a step forward from its old product line, other analysts agreed.

“I think the biggest surprise was that they delivered on what they said they would deliver, which maybe shouldn’t be a surprise but these days often is from a vendor,” said Michael Gartenberg, Research Director at Gartner.

“They said this would be ready in early 2013 and they delivered a platform that is complete; they’ve done everything they needed to do in terms of table stakes, with a complete range of services out of the box,” said Gartenberg, in an interview at the New York event.

While BlackBerry was undisputed leader in the smartphone market for years, the advent of the iPhone and then the rise of Android-based devices has stolen loyal users away from the company. However, BlackBerry still claims 80 million users, and the new devices launched Wednesday offer enough to keep current fans in the fold, analysts agreed.

“I think this is definitely a good start, and it will help slow those defections, but many of the people in the U.S. for example have already left,” noted Jan Dawson, Chief Telecoms Analyst at Ovum. “Most of the remaining BlackBerry users in the U.S. are on corporate-issued devices, so it’s about convincing the IT department to continue with BlackBerry rather than about convincing end users,” Dawson said at the event.

Outside of North American corporate users, BlackBerry will run into trouble, Dawson said.

“Outside there are still more consumers making their own decisions to use BlackBerry but many of them are in emerging markets where BlackBerry 10 won’t be relevant for a long time because it’ll be too expensive,” Dawson said.

BlackBerry still looks like it will be strongest in the corporate market, rather than in the consumer arena, Dawson added.

“The only big differentiators are productivity-centric, so they’ll help with business users, but not so much with pure consumer users,” Dawson said.

Heins said that the company plans to ship the Z10 in mid-March in the U.S., which was a bad surprise, noted several analysts. Still, the Z10 will launch over the next few days in the U.K. and Canada, underscoring the company’s ability to deliver on its promises, Gartner’s Gartenberg said.

“Remember this is a new platform and U.S. carriers tend to have a lengthy testing time for new platforms, so the March launch in the U.S. is understandable,” Gartenberg noted.

The big hurdle for BlackBerry is to get the word out to consumers, who have been walking into retail stores for several years to consider mainly Android and iPhone handsets, analysts agreed.

“BlackBerry has to get out there and evangelize the new platform,” said IDC’s Llamas. “They have a competitive product, but they need to get into the consumer conversation, so that when people walk into stores, they’re talking about not just the iPhone and Android, but want to look at a BlackBerry too.”

It will be an uphill battle, noted Forrester’s Charles Golvin in a blog post.

“At best, RIM’s new products will allow it to stop the bleeding and hold its market share. Our consumer data shows that, while more than half of U.S. BlackBerry owners plan to get a new phone in the next year, fewer than two in five of them say it will be another BlackBerry,” Golvin writes.