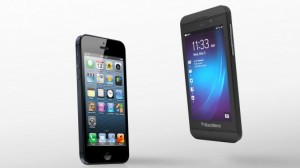 The firm formerly known as RIM has announced its BlackBerry Z10 smartphone, the top-of-the line BlackBerry that – it hopes – is going to take on the iPhone 5 and save the company.

BlackBerry, as RIM is now known, has announced two phones packing its new BlackBerry 10 operating system. The Q10 and Z10 are both high-end smartphones with a raft of new features.

The difference between the two is mainly that the Z10 is an iPhone-like touchscreen phone, whereas the Q10 is a more traditional BlackBerry with physical keyboard.

Let’s take a look at how the Z10 compares to the iPhone 5.

The specifications for the BlackBerry Z10 are similar to the Q10, and both are a notch above the iPhone 5. However, we’ve seen with several devices that simply packing hardware into a box means nothing without the software to make use of it. Even then, most users don’t really care too much about benchmark tests, or processor speeds, as long as the device functions perfectly adequately and offers a good feature set.

BlackBerry devices are underwent extensive testing and benchmarking at Macworld last week, and we’ll be able to report in more depth shortly. Even so, there are certainly plenty of new features that will give Apple something to worry about.

Stay close to what’s important — keep everything that matters to you in one place. Simply peek into the BlackBerry Hub from any app with just a swipe and flow effortlessly in and out of your messages and conversations.

The new touchscreen BlackBerry Keyboard provides an effortless typing experience. It learns your writing style and suggests words to help you type faster, more accurately and with the least amount of effort. And if you tend to mistype certain letters, the keyboard will remember and subtly adjust to make sure you hit the right key.

Switch your BBM chat to a BBM Video1 conversation and talk face-to-face with those that matter to you most. Use the new Screen Share feature to show photos, your browser, or review a business document together. You can even share the view from your camera. It’s an amazing new BBM experience for BlackBerry 10 smartphones.

Pinpoint and adjust elements of your picture to get the photo you want. Time Shift mode captures milliseconds before and after your photo – so you can scroll back on the dial to open one friend’s eyes and then forward to catch your other friend smiling, before combining it all to create the perfect picture.