Riyadh, KSA, 12 March 2022: Leading logistics company Bosta has just announced the opening of its first office in Riyadh, signalling the official launch of its business to provide its distinguished services to its customers in the Kingdom of Saudi Arabia. This move was made in line with the country’s Vision 2030 initiatives to support the local economy through various strategic programs aimed at business owners and entrepreneurs. The expansion is also part of Bosta’s plan to spread and offer its services across the Middle East after a very successful launch in Egypt. 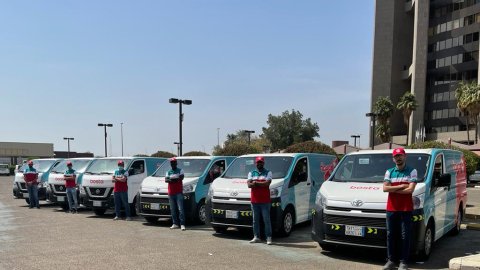 The new expansion comes in parallel with Bosta’s great success in raising a new investment round (Pre-Series B) through regional and international investors led by Khwarizmi Ventures, along with other current investors in addition to Hassan Allam Holding.

“We are pleased to launch Bosta in Riyadh. We believe that this step will enable us to significantly expand our activities in a market that’s very important to us. The launch of our office in KSA is part of Bosta’s expansion plans across the Middle East this year, which will be followed by another launch in the region by the end of this year”, said Eng. Mohamed Ezzat, co-founder and CEO of Bosta. “Our office in Riyadh is Bosta’s first venture in the Arab region, continuing our success that started in Egypt in 2017 that managed to deliver 10 million shipments since our introduction in the market”, he added.

Commenting on the launch, Chief Growth Officer at Bosta, Omar Yaghmour, said: “KSA marks the first step of Bosta’s expansion to become a global player, our goal is to scale Bosta to become one of the top players in the region”.

Bosta has also announced the appointment of Eng. Imad Fares as the Managing Director of its Riyadh branch. With over 20 years of experience in the Gulf region, Fares has also served as the General Manager of FETCHR in Saudi Arabia for four years. He joined Bosta as the Managing Director for KSA Office where he will lead the company’s growth operations and set a business and expansion strategy.

“Given our closeness to players in the e-commerce space, we see the challenges and potential in the Delivery & Logistics sector that Bosta’s tech-first mindset can tackle. Being a focal area with a large economy and high e-commerce activity, the Saudi Freight & Logistics market’s attractiveness is gaining the attention of startups and investors. After its immense success since inception in Egypt, we are excited to witness and support Bosta’s accelerated growth as it kicks off its operations in the Kingdom”, commented Abdulaziz Al-Turki, Managing Partner at Khwarizmi Ventures.

In a recent report by the Saudi Communications and Information Technology Commission, it showed that the total financial value of requests made through delivery applications had reached more than two billion riyals (US $533 million) since the beginning of the COVID-19 pandemic, with total requests amounting to 26 million, an increase of up to 250% when compared to pre-pandemic numbers.