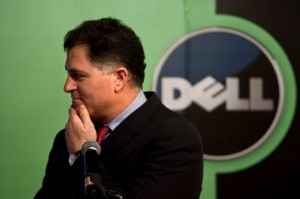 Following weeks of speculation, Michael Dell has teamed up with investment firm Silver Lake to buy computer maker Dell, in a deal valued at around $24.4 billion.

Following the transaction, Michael Dell will continue on as CEO and chairman of the company, according to a statement.

“I believe this transaction will open an exciting new chapter for Dell, our customers and team members,” Michael Dell said in the statement. “We can deliver immediate value to stockholders, while we continue the execution of our long-term strategy and focus on delivering best-in-class solutions to our customers as a private enterprise.”

According to the statement, the deal is being financed through a combination of cash and equity contributed by Dell, cash from investors affiliated with Silver Lake, cash invested by MSD Capital, L.P., a $2 billion loan from Microsoft, roll-over of existing debt and debt financing that’s been committed by BofA Merrill Lynch, Barclays, Credit Suisse and RBC Capital Markets.

Microsoft issued a statement saying that it is “committed to the long term success of the entire PC ecosystem and invests heavily in a variety of ways to build that ecosystem for the future. We will continue to look for opportunities to support partners who are committed to innovating and driving business for their devices and services built on the Microsoft platform.”

Dell has been around in one form or another since 1984, when Michael Dell started a company called PCs Ltd. with $1,000 in his pocket. He changed the name to Dell and took the company public four years later.

Dell made its biggest mark in the 1990s, when its model of building PCs to order and shipping them directly to customers undercut rivals like Hewlett-Packard and IBM, which had complex supply chains and backlogs of inventory. In 2001, Dell became the top PC seller in the world.

Its fortunes didn’t last, however. Dell’s rivals adopted some of its low-cost production methods, while also expanding into other areas such as services and software. Dell stayed focused on PCs and servers and eventually found itself left behind. In 2007, after a spell away from his CEO job, Michael Dell returned to try to right his listing ship.

Since then, it’s been on an acquisition spree, buying 25 companies to build out networking, software and services businesses. Notable buys include Quest Software, Perot Systems, Force 10 Networks and Wyse Technologies. Dell’s goal is to refashion itself into an all-round provider of hardware, software and services, mimicking larger rivals IBM and HP, except focused primarily on the midmarket.

It’s had some success, but combining those acquisitions into cohesive “integrated systems” is a long road. Dell itself said last year that it could be a two to three year journey. Investors have been impatient, and Michael Dell apparently grew tired of running his company to the whims of a stock market that often favours immediate return over long-term investment.

“Dell has made solid progress executing this strategy over the past four years, but we recognise that it will still take more time, investment and patience, and I believe our efforts will be better supported by partnering with Silver Lake in our shared vision,” Michael Dell said in the statement. “I am committed to this journey and I have put a substantial amount of my own capital at risk together with Silver Lake, a world-class investor with an outstanding reputation. We are committed to delivering an unmatched customer experience and excited to pursue the path ahead.”

The company’s PCs and server hardware remains the core of its business for now. Dell has said it will stay in the PC market because it provides an entry point to selling other, higher-margin products and services. It offers fewer low-cost computers and more high-end models like its XPS PCs, which has caused it to fall behind HP and Lenovo in worldwide shipments.

Dell has also exited the smartphone market, but sells tablets that target use both at home and in the enterprise.

The transaction calls for Dell shareholders to get $13.65 in cash, a premium of about 25 percent over Dell’s closing price on January 11, when rumours of a deal first appeared, the company said.