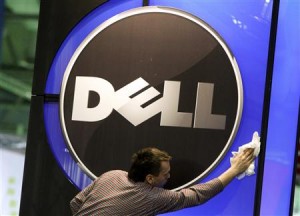 Dell has reported a sharp drop in revenue and profits for the third quarter as the weak PC market continued to weigh on its results.

Dell’s revenue for the quarter, ended Nov. 2, was US$13.7 billion, down 11 percent from a year earlier and shy of the $13.9 billion financial analysts had been expecting, according to a poll by Thompson Reuters.

The Texas firm still gets roughly half its revenue from PCs, so declines in that market hurt the company. Worldwide PC shipments declined 8 percent in the third quarter, as a result of a weak economy and a move toward smartphones and tablets for more computing tasks, Gartner said last month.

The slowdown has also hit Intel, which last month also reported a drop in revenue and profit for its third quarter.

Dell is trying to boost its profits by selling more high-end PCs, rather than cheaper models. But a recent report from IHS iSuppli said consumers are favouring low-end systems, and that high-performance PCs will account for only 6 percent of the market this year.

Dell’s revenue from desktop PCs declined 8 percent in the period just ended, to $3.1 billion, while sales of “mobility products” — including laptops — fell 26 percent to $3.5 billion, the company said.

Sales of storage equipment, services and software also declined. A bright spot was Dell’s server and networking business, where combined sales were up 11 percent, CFO Brian Gladden said in a statement.

“We’re also encouraged by early interest in our new Windows 8 touch portfolio and the opportunities it creates for our commercial and consumer businesses,” he said.

Before the results came out, Dell’s shares closed at $9.58 Thursday, level with the previous day’s close. That was down from a 52-week high of $18.36 per share earlier in the year.