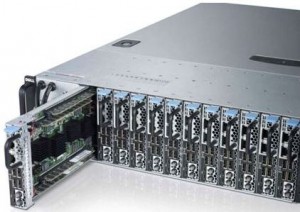 The proof-of-concept server is code-named Copper and is the first one from Dell that is based on the ARM processor. Dell will not sell the server, but will install prototypes at specific locations so customers can kick the tires around ARM, whose processor designs are found in most smartphones and tablets today.

Some of the world’s largest Web companies, including Facebook and Google, buy servers in volume to boost performance while lowering power costs. However, as companies look to cut data centre costs, there also is a growing interest in low-power ARM processors for servers. Servers sold today by Dell are based on x86 processors from Intel and Advanced Micro Devices, which are used in most data centres.

ARM processors are slower than their x86 counterparts, but have power-efficiency, density and price attributes that intrigue customers, said Forrest Norrod, vice president and general manager of server platforms at Dell. Customers are curious about the possibility of cutting power costs by packing together a large congregation of ARM servers to quickly process requests related to, for example, social media or search.

“We think ARM is a potentially relevant technology to several sets of core customers. Our customers are echoing the same thing and asking us to help in this evaluation,” Norrod said.

Experiments around implementing ARM in servers as an alternative to x86 for cloud and supercomputing applications are already under way. Hewlett-Packard has announced ARM-based server designs and chip maker Nvidia has mixed its Tegra 3 chips and graphics processors in a Barcelona supercomputer. Intel has upped the ante with its recent low-power Xeon E3 processors for cloud computing customers.

ARM is good for tasks that don’t require a lot of complex calculations, but need to be processed concurrently, said Jim McGregor, president at Tirias Research. In addition to processing Web transactions, ARM chips could power security-oriented tasks, like matching a snapshot of an individual at an airport to a database of hundreds of millions of people. But ARM still cannot match up chips from Intel and AMD for resource-heavy tasks such as databases.

Also, ARM into servers won’t be a quick transition as companies need to validate the architecture, port software and match hardware installations with the server upgrade cycle, which on average is about three years, McGregor said.

“It’s still very much in its infancy,” McGregor said.

Norrod conceded that ARM is not ready for prime time on servers, and that it could be a few years until the architecture starts competing with rival chips from Intel and AMD. The current ARM processors lack many of the critical features sought in data centres today, such as 64-bit processing and memory capabilities. And while a majority of smartphones and tablet software is written for ARM processors, very little server software is being written for the architecture.

ARM, a U.K. company that licenses processors to chip makers, will support addressing only up to 40 bits with its upcoming Cortex-A15 processors. ARM has said its first 64-bit processors will be released later this year, with the first designs targeted at servers and smartphones. ARM said that chips from licensees based on ARMv8 will be in volume production in 2014.

Dell is taking a pragmatic approach and setting up servers so developers can write and compile software and get a feel for ARM servers, Norrod said. Dell clients will get to understand the opportunities around ARM, and get a head start in developing software and infrastructure for the servers, he added.

“What’s interesting about ARM is not what’s available today, but what may be available in 18 to 24 months,” Norrod said.

Dell’s first Copper servers will be used in the U.S. and China, and then spread across the rest of Dell’s worldwide “solution centres” where customers can build reference designs for server and software installations. One is being installed at the Texas Advanced Computing Center, where developers will be able to book time to use the server. Dell officials said the clusters on the ARM server can also be accessed remotely by customers.

The 3U rackmount chassis has 48 ARM servers with a total of 192 processor cores, with each ARM server drawing a maximum of 15 watts of power. Each server uses Marvell’s quad-core Armada XP 78460 chip, which runs at 1.6GHz, and has error correction features and networking and storage components.

Dell does not plan general availability of the server at this time, but the company will monitor the market and decide whether to launch it publicly over time, said Steve Cummings, executive director for marketing at Dell’s Data Center Solutions division.

Dell is following the example of HP, which in November said it would offer its first, proof-of-concept low-power ARM server so early access customers can test and benchmark it. The server packs 288 chips from ARM licensee Calxeda into a 4U rack-mount server, and is part of a new HP platform dubbed the Redstone Server Development Platform.

Rolling the clock forward, Dell’s Norrod said he couldn’t predict the future, but said that since Microsoft is bringing Windows 8 to ARM, it is possible that other companies will start porting applications to ARM. Norrod pointed out that software options are growing for ARM servers.

A version of the Linux-based Ubuntu OS is available for ARM and the LAMP (Linux, Apache, MySQL and PHP software) stack has also been optimised for ARM. Dell also said Hadoop, Openstack and Java have also been optimised for ARM. Dell has written Crowbar, it’s open-source management framework, to work on ARM servers. Crowbar helps install, deploy and monitor cloud software across clusters.

Moreover, ARM’s emergence on servers could keep Intel on its legs, Norrod said. Intel and AMD will not rest on their laurels, and will continue to innovate, which helps the server market.