Emirates may offer passengers the option to loan government approved laptops for in-flight use, as the carrier seeks to soften the blow from a U.S. ban on electronics in airplane cabins. 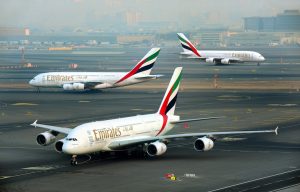 In a recent Bloomberg interview, President Tim Clark said that the Dubai-based airline may explore “creative” ways to work around the ban if it remains in place over the long term. That could include providing approved laptops that “can be used in-flight to help people do what they need to do in the absence of devices that are in the hold.”

Clark is also mindful of the impact the ban could have on business if travellers decide to book with rival airlines. “If customer demand diminishes due to “whatever actions the United States government takes, we will have to adjust accordingly, that’s just good business,” he said.

Under a rule that came into effect on Saturday, the U.S. prohibits travellers on flights from 10 Middle Eastern airports, including Dubai, from bringing large electronics into the aircraft cabin. The U.K. partially followed, but didn’t target Persian Gulf hubs.

Clark was critical of the selective targeting of the ban, saying if there’s a risk that laptops can be used during flights for terrorist activity, then the restriction “should be applied to the airline industry universally,” he said.

Emirates said the rate of bookings growth to the U.S. dropped after Trump’s initial travel ban in January. According to Clark, the latest policy won’t “help” demand for Emirates’ 18 flights a day to the U.S., adding that a true assessment of the ban’s impact will come next month as travellers plan summer vacations.

Still, “so far, so good,” he said, after the first 48 hours of the ban’s implementation, including allowing passengers to use laptops up until boarding, proceeded without customer complaints.

“It’s still early days, we have to see what the next few months will bring us.”