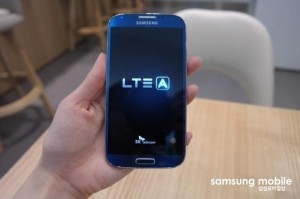 European operators Vodafone, Telefónica and EE have all started testing LTE-Advanced, and are aiming to offer speeds over 200Mbps. But a lack of devices means commercial services will have to wait.

While LTE is still in its infancy in many parts of the world, operators have started to test LTE-Advanced, which uses a handful of technologies to further increase speeds. On Thursday, Vodafone and Telefónica in Germany announced small-scale trials of the speedy technology in Dresden and Munich. The two join British operator EE, which announced a test in London’s startup cluster Tech City earlier this month.

All three are taking advantage of a feature called carrier aggregation to improve speeds. It allows networks to devote more resources to some users by treating two channels in the same or different frequency bands as if they were one. The amount of frequencies used decides the maximum bandwidth. EE is using two times 20MHz to reach 300Mbps, while Vodafone and Telefónica are using one 10MHz channel plus one 20MHz channel for up to 225Mbps.

But carrier aggregation isn’t just about theoretical top speeds: Implementing the technology will also mean improved, although lower, speeds even for users who haven’t got the perfect coverage needed for the highest speeds, said Per Narvinger, head of Ericsson’s LTE radio products, in an interview earlier this year.

While the networks are ready, it will take longer for devices to catch up. The EE trial will launch using a Huawei router, which is the first device of its kind, according to the operator. The router can provide a wireless high-speed connection to up to twenty 802.11ac devices.

EE expects the first commercially available routers will be introduced by the middle of next year, with smartphones arriving in the second half of the year. EE also plans to launch commercial services in 2014. In June, SK Telecom launched carrier aggregation with an updated version the Galaxy S4 smartphone from Samsung Electronics. The South Korean operator’s network offers up to 150Mbps by combining two 10MHz channels. That speed can also be achieved with 20MHz of continuous spectrum in one band, which is kinder on smartphone and tablet batteries.

The lack of terminals compatible with the higher speeds means some operators that can offer 150Mbps without carrier aggregation are taking a more cautious approach.

“When the chip sets are ready and implemented in a lot more terminals, we will of course consider commercial deployment of LTE-Advanced, but we are not there yet. Our priority at the moment is on building coverage so that more customers can use 4G,” said Tommy Ljunggren, vice president of System Development at TeliaSonera’s Mobility Services.