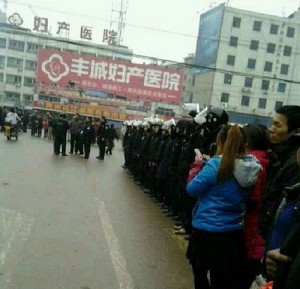 A Foxconn supplier in China was thrown into disarray over the weekend after more than 1,000 workers reportedly went on strike demanding better pay. Riot police were reportedly called in to suppress the protest.

The workers strike occurred at a company called Jiangxi Xin Hai Yang Precision Components, according to labour protection group Students and Scholars Against Corporate Misbehaviour (SACOM). The strike started on Thursday and then continued into the next day, and involved a large crowd of workers blocking access to a main street in the city.

But contrary to initial media reports, Foxconn said that Jiangxi Xin Hai Yang Precision Components was not a part of the company.

Foxconn is aware of a “workplace issue” that occurred at the supplier, the company said in a statement on Sunday without elaborating. It has asked the supplier to work with the employees and the local government to resolve the matter.

Jiangxi Xin Hai Yang Precision Components was contacted on Monday, but the company said its spokesperson was not available and declined to comment.

Worker strikes and riots have previously occurred at Foxconn’s own factories in China. Last September, 2,000 workers at the company’s plant in Taiyuan, China, rioted after a brawl erupted between employees and security guards.

The city of Fengcheng said its mayor visited Jiangxi Xin Hai Yang Precision Components on Friday, but made no mention of the workers’ strike. In a website posting, the city government said that the supplier manufactures computers, servers, printers, mobile phones, and employs 5,500 people.

“Industries that want to manage, and improve, efficiency must also, at the same time, put their people first and pay more care to their workers’ lives,” the post added.

Workers at the factory make a base salary of CNY 1,300 (US$ 207) a month, but can earn up to CNY 2,600 during the peak production season when overtime is included, according to SACOM.