The ISS in Street View was captured in partnership with NASA, ESA, JAXA, Roscosmos and CASIS. 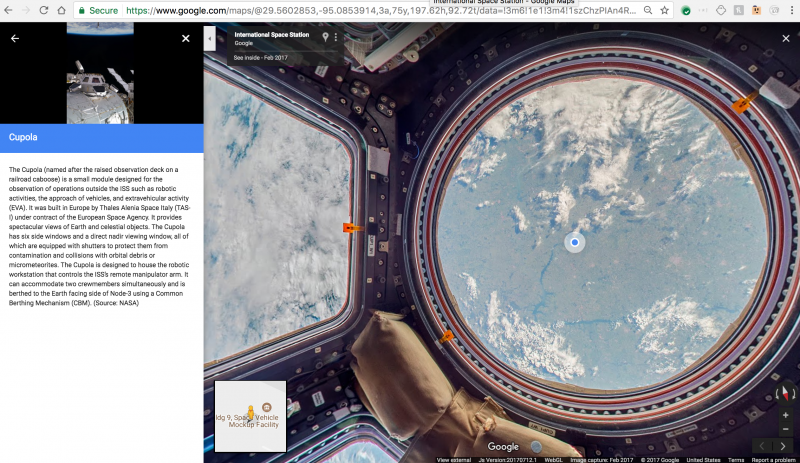 In a blog post published by Google, Thomas Pesquet, Astronaut at the European Space Agency (ESA), wrote, “For 16 years, astronauts have been working and living on the ISS, a structure made up of 15 connected modules that floats 250 miles above Earth. The ISS acts as a base for space exploration—possible future missions to the Moon, Mars and asteroids—and gives us a unique perspective on Earth itself.”

The panoramic 360-degree imagery of the ISS couldn’t be created using Google Street View’s usual methods, according to reports. Therefore, the Google team worked with NASA and the Marshall Space Centre to create a “gravity-free method” of collecting pictures using DSLR cameras and equipment already on board.

This is the first Street View collection with annotations, a feature previously only available for Google Arts & Culture museums.

Thomas Pesquet, a European Space Agency astronaut on the ISS, then collected the photos in space and sent them down to Earth where they were stitched together to create the panoramas.

“We did a lot of troubleshooting before collecting the final imagery that you see today in Street View,” said Pesquet. “The ISS has technical equipment on all surfaces, with lots of cables and a complicated layout with modules shooting off in all directions—left, right, up, down.”

Now as you walk through the modules of the ISS in Google Maps, viewers will see clear and useful annotations highlighting things like where the astronauts work out to stay physically fit, what kind of food they eat, and where they do scientific experiments.

According to Google, Street View started out as Larry Page’s far-fetched idea to create a 360-degree map of the world and the firm recently celebrated 10 years of beautiful imagery from around the world.

“Over the last decade, a lot has changed—the technology we use, the appearance of the planet—but the goal of Google Maps has remained the same: to help you navigate and discover new corners of the Earth and now beyond,” said Google.