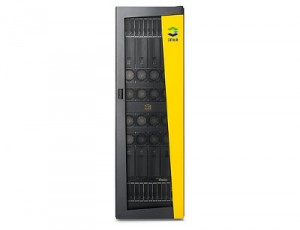 Hewlett-Packard is extending its 3PAR enterprise storage offerings with an all-SSD version of the P10000 array.

The all-SSD (solid-state disk) version, announced on Monday and available immediately starting at US$350,000, is designed to speed up applications in cloud and virtualised data centres. It also can eliminate manual data-tiering functions in some cases and reduce the physical footprint of storage, according to HP.

SSDs are widely available for disk storage arrays, where they offer a fast tier for often-used data and can eliminate the need for the fastest, most expensive sets of spinning disks. Solid-state storage also uses less power than spinning disks. But once data is on one of these hybrid arrays, it may still need to be moved between the SSDs and the higher capacity traditional drives. HP offers 3PAR Adaptive Optimization software to automate tiering, but some customers will prefer to simply use a single tier of SSDs for certain applications, said Vish Mulchand, an HP product manager for 3PAR products.

Being able to deploy SSDs throughout the P10000 could save data centre space in some cases, according to HP. That’s because hybrid arrays that offer only a part of their capacity for SSDs can force IT shops to buy more arrays just to get the amount of solid-state capacity they need. 3PAR Adaptive Optimization software also works with the all-SSD P10000.

The new configuration of the P10000 has no such limits. It can accommodate as many as 512 SSDs per array, with no space taken up by spinning disks. The system can also be equipped with traditional drives, Mulchand said. It is HP’s second all-SSD array, joining the P4900 file storage system that is based on iSCSI and geared more toward medium-size businesses, Mulchand said.

HP acquired 3PAR in 2010 for $2.35 billion, winning a bidding war with Dell. The purchase brought HP a line of storage products ideal for virtualised and cloud infrastructures, Mulchand said. HP introduced the P10000 in August 2011.

Also on Monday, HP introduced HP Smart Cache, a server-based SSD cache feature for its ProLiant Generation 8 servers. The Smart Cache system is designed for data that’s in high demand from apps running on the server. IT departments can use multiple standard drive bays in a Gen8 server for that high-speed cache. HP SmartCache will be available soon, according to the company. The Gen8 servers were announced earlier this year.

For caching in HP’s previous ProLiant servers, called Gen7, customers were able to use flash PCIe cards from Fusion-io. They can still use those if they choose, Mulchand said. But there are several advantages to using SSDs, which use standard hard drive slots, instead of the types of cards that Fusion-io uses, he said. One plus is that a server’s drive slots offer more room for SSD capacity than is typically available for PCIe cards, Mulchand said. In addition, an HP Smart Cache can use HP Smart Array software for RAID.

A traditional array like the P10000 that is filled with SSDs typically won’t match the performance of a purpose-built SSD platform, but there is still a sizable market for such a product as database administrators try to boost their storage performance, said David Floyer, a co-founder and analyst at Wikibon.

“In high-performance database environments, getting rid of disk is a good thing,” Floyer said.

Likewise, using SSDs for on-server cache isn’t quite as fast as using PCIe cards, but for some applications, it may be just the right thing, he said.

“If it’s working now and all it needs is a little kick, that’ll be fine,” Floyer said.