With the release this month of the first commercial server based on its Power9 processor, IBM is reaching another milestone in its quest to be the AI-workload leader for data centres and web service providers.

The Power9 chips in the systems hitting the market now don’t rev up to the top speeds provided by Intel’s Xeon Scalable Processor line, but they offer blazing throughput aimed to give them an edge in machine learning and accelerated database applications.

IBM unveiled its first Power9 server, the Power System AC922, Tuesday at the AI Summit in New York. It runs a version of the Power9 chip tuned for Linux, with the four-way multithreading variant SMT4. Power9 chips with SMT4 can offer up to 24 cores, though the chips in the AC922 top out at 22 cores. The fastest Power9 in the AC922 runs at 3.3GHz. 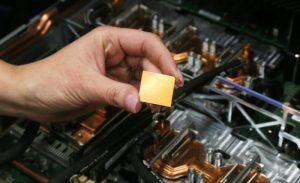 The air-cooled AC922 model 8335-GTG set for release mid-December, as well as two other models (one air-cooled and one water-cooled) scheduled to ship in the second quarter next year, offer two Power9 chips each and run Red Hat and Ubuntu Linux.

In 2018 IBM plans to release servers with a version of the Power9 tuned for AIX and System i, with SMT8 eight-way multithreading and PowerVM virtualisation, topping out at 12 cores but likely running at faster clock speeds.

IBM has been working on the new-generation Power processor for four years, and started revealing specifications last year. The history of Power processors is intertwined with IBM’s AI efforts, and complements the company’s Watson artificial intelligence cloud service. The Watson system that beat humans in “Jeopardy” in 2011 ran on Power7 processors.

The Power9 family distinguishes itself by being the first processor line to support a range of new I/O technologies, including PCI-Express 4.0 and NVLink 2.0, as well as OpenCAPI, an interface architecture for high bandwidth AI and database accelerators such as ASICs and FPGAs.

These technologies allow the processors to work with a variety of coprocessors for workloads related to machine learning, high-performance computing, visual computing, and hyperscale web serving.

Recent news about IBM can be found here.