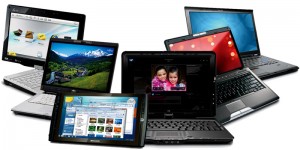 If you’re looking for a new laptop or refurbished tablet, June will be a good month for you, according to the price watchers at DealNews.com.

Laptop deals during the month will be driven by the introduction of new models sporting Intel’s Ivy Bridge processor, DealNews noted in its monthly “Best and Worst” report.

The price watchers explained that new notebooks with Ivy Bridge will push prices down for laptops with that processor’s predecessor, Sandy Bridge. Prices for desktop replacements with Sandy Bridge are already at all-time lows, they observed, and the new Ivy Bridge systems will further chop prices.

In mid May, a 16-inch Ivy Bridge systems with 8GB of RAM, dedicated 1GB video cards and 1TB hard drives, and in some instances built-in Blu-ray players, sold for $770, the price watchers said.

If you can’t afford to buy a new Apple or Android tablet, you’ll be able to take advantage in June of slipping prices for refurbished slates, DealNews predicted. Apple’s already clipped the price to $319 on the base configuration of a refurbished iPad 2, it said, and prices for previously-owned Motorola Xooms, Samsung Galaxy Tabs and Blackberry PlayBooks have reached all-time lows.