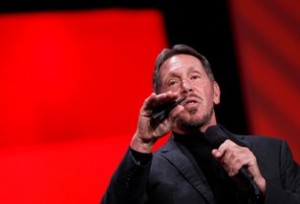 The Oracle OpenWorld Conference 2012 opened today at the Moscone Exhibition Centre, San Francisco. The five day affair began today with a keynote from CEO Larry Ellison who began by thanking the company’s 390,000 customers across the globe for their belief in the company’s strategy and roadmap.

Ellison then went on to thank sponsoring Platinum partners Fujitsu Limited, a company that shares an intensive relationship with the ICT giant.

The highlight of the keynote was the four announcements that Ellison made associated with the company’s cloud strategy and Exadata in-memory database. “Cloud is a new era of utility computing, today ‘As-a-Service’ is the keyword with very organisation looking to leverage the benefits of an environment where the complexity is hidden from the users, where the infrastructure is managed and costs are borne by the service or cloud provider. A great idea, but an old one that was first practiced by the electricity utility providers,” he said.

“Oracle began delivering the Oracle Cloud in 2011 at the platform and application level, but we made the discovery that this was not enough. What customers wanted was a combination of SaaS, PaaS and IaaS. My first announcement is associated with this very fact, Oracle Cloud will now offer infrastructure services and through this announcement we can proudly say we have invested in all three layers of the cloud to give our customers maximum benefit. My second announcement is the Oracle Private Cloud that was idea born from conversation with the banking industry, who due to regulations were restricted in their ability to leverage cloud services. Oracle will now extend cloud services behind a customer’s firewall, they can leverage the same cost savings for we will set up, manage and monitor the environment within their own data centre or ours if they so wish. The best part is, this Private Cloud offering is seamlessly connected to the Oracle Cloud and gives customers a sense of reliability with Platinum support, 15 minutes response time,” Ellison announced.

He then introduced the Oracle Database 12 C, a multitenant database where separate memory and processes are allocated to each database. “This idea was originally practiced by the SaaS providers but on the application layer that often caused a number of problems. Our proposition is to use the same idea but on the database level, a new architecture based on container databases that can contain a number of individual, pluggable databases. The database management system is then needed to keep the databases separate and secure, without making any changes to the different applications. As a result of this, enterprises can leverage cost benefits associated with using much less hardware while running five times the number of databases. ‘Manage many as one’ that’s the idea,” he explained.

Finally, Ellison went on to announce the latest version of the Oracle Exadata X 3, with 26 TB DRAM in one rack and 10 times the database compression. “Essentially this means 220TB memory in one rack. More than we’ve ever imagined. Exadata X 3 is priced the same as X 2 but comes with four times the Flash memory. With the Exadata Smart Flash Cache enterprises can leverage 20 times the write performance. Existing customers using the Exadata X 2 or V 2 need only upgrade their Exadata software to avail the write performance,” he said.

In true Ellison style, the keynote did not go without the mention of SAP, EMC and IBM. Ellison claimed the company beats SAP HANA on the in memory front in terms of storage capacity while it beats IBM on the cloud front with investments across all three layers and EMC on the Exadata in-memory database in terms of bandwidth comparison as well as price.

He concluded his keynote by alerting the audience to another set of announcements he is scheduled to make on Tuesday, the 2nd of October associated with the company’s Fusion middleware and applications.

Oracle OpenWorld is being held from the 30th of September till the 4th of October at the Moscone Exhibition Centre in San Francisco, USA. Pallavi Sharma, Editor, ResellerME is reporting live from the conference. For live updates follow @computernewme #OOW.