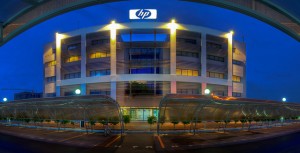 Despite a major push by rival Lenovo, Hewlett-Packard has held onto its position as the top seller of PCs worldwide, according to IDC.

The researcher Thursday reported that HP maintained its worldwide PC lead in the fourth quarter despite slowing sales — shipment totals were 0.6% lower than last year while Lenovo’s grew by 8.2%.

“HP continued to defend its top position in IDC’s worldwide ranking, recovering somewhat from past weakness in key markets,” IDC reported. “An aggressive push for Windows 8 volume helped the vendor make gains in Asia/Pacific and its home turf in the U.S.”

IDC also reported that while Lenovo made strong market gains in the quarter, its growth wasn’t as dramatic as it had been earlier in 2012.

“Lenovo outpaced the market with growth of over 8%,” noted the IDC report. “Despite the positive performance, Lenovo’s gains remained significantly smaller than several quarters ago when the company was besting market growth by nearly 30%.”

Last year, HP continued on a track of losing its long-time place atop the worldwide PC market to Lenovo.

Gartner has yet to release its fourth quarter PC market share figures.

Zeus Kerravala, an analyst with ZK Research, expects that Lenovo will soon be the number one PC seller on all lists.

“I think it’s only a matter of time,” said Kerravala. “It’s been tough times for HP across its product lines. There have been so many questions about whether HP will stay in the PC business, people are scared away.”

In 2011, HP disclosed that it was considering selling its PC manufacturing business.

Though HP later said it had decided to keep the PC business, buyers remained wary of its long-term commitment to the market.

Kerravala said he saw the effects of that as recently as this past holiday season when he was looking to buy a laptop.

“I was in BestBuy looking at laptops and the person directed me to Lenovo because HP may or may not stay in PCs,” he added. “Those rumours stick around for a long time, and loyalty is so hard to get back.”

Kerravala said HP needs to reaffirm its commitment to the PC market, while Lenovo needs to increase its advertising in the U.S. where it doesn’t have as much name recognition, even though it’s roots are with IBM. IBM sold its PC business to the Chinese firm in 2005.

“If I were Lenovo, I would hit the consumer market hard and step on HPs throat,” he said.