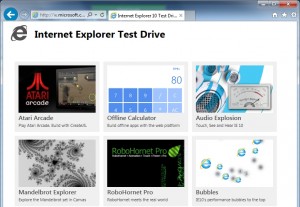 Internet Explorer 10 for Windows 7 requires users to have at least Service Pack 1 installed. Microsoft offers direct downloads of the browser in 95 languages, though the company will automatically upgrade Windows 7 users to the new browser in the coming weeks via Windows Update.

The wait will be short if you’ve been helping Microsoft’s engineers test the browser: In a blog post heralding the release, Microsoft said it will be upgrading users of the Internet Explorer 10 Release Preview to the final release today.

IE 10 is the latest version of Microsoft’s seminal browser, and it has been available on Windows 8 computers and Windows RT tablets since their launch in late October. The Windows 7 version also sports a touch-enabled interface, though it is visually similar to IE 9 on Windows 7, eschewing the minimalistic aesthetic of Windows 8’s modern UI adaptation of the browser.

Internet Explorer 10 for Windows 7 packs some handy usability features, including integrated spell checking and auto-correct features. The improvements continue under the hood as well. The browser offers better support for Web standards such as HTML 5, and Do Not Track – which asks websites not to track the users’ browsing history in order to serve targeted ads – is enabled by default. Internet Explorer 10 also reduces strain on CPUs and batteries.

Perhaps most importantly, Internet Explorer 10 is just plain faster than Internet Explorer 9. Microsoft claims that improved JavaScript performance and other technical trickery help IE 10 hum along at up to 20 percent faster speeds than IE 9.

According to the latest figures from StatCounter, Internet Explorer is now the second most popular browser with 30 percent of the global desktop browser market. Google’s Chrome controls just over 36 percent, while Firefox – which has been steadily declining – now sits at just over 21 percent.