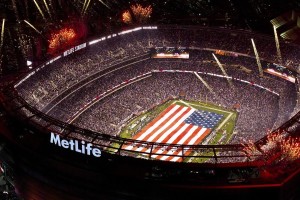 Sunday’s Super Bowl produced skyrocketing wireless voice and data usage by fans inside the MetLife Stadium, higher than any other one-day sporting event, according to AT&T and Verizon Wireless.

AT&T reported in a blog that total data use over its cellular network at the stadium in East Rutherford, N.J., reached 624 GB, equal to 1.8 million social media posts with photos. The most data uploaded and downloaded, 119 GB, occurred before the 6:30 p.m. kickoff, between 5 and 6 p.m., as fans sent and received photos and videos.

AT&T customers also made 55,000 calls, according to John Donovan, senior executive vice president of AT&T technology and network operations. The numbers confirm that “demand for mobile data is still growing at a rapid rate,” Donovan said.

Both companies upgraded cellular abilities inside the stadium. Verizon upgraded a distributed antenna system (DAS) inside the stadium to quadruple LTE data capacity, while AT&T said it installed a new DAS at the stadium, tripling the wireless capacity of an original one.