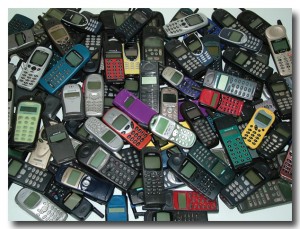 Worldwide mobile phone sales dropped by two percent in the quarter ending in March compared to the same period in 2011, which is the first time there has been a sales decline in the market since 2009, according to Gartner.

According to the technology research company, 419.1 million mobile phones were sold in the world during the calendar quarter ending in March.

The slip was largely due to a sales slowdown in the Far East, explained Anshul Gupta, a principal research analyst at Gartner in the United Kingdom.

“The first quarter, traditionally the strongest quarter for Asia—which is driven by Chinese New Year, saw a lack of new product launches from leading manufacturers, and users delayed upgrades in the hope of better smartphone deals arriving later in the year,” he said in a statement.

For consumers, especially those buying off-brand phones, the sales slump could be good news. That’s because so-called “white box” phone makers were unable to adjust their production runs during the quarter, resulting in inventory backlogs. “Gartner expects some of this volume to be sold during the next couple of quarters, because the channel is likely to lower the prices to dispose of the stock,” the research firm predicted.

While Gartner expects sales to pick up as the year progresses, it’s shaving 20 million units off its sales projections for the year, according to another of the firm’s analysts, Annette Zimmermann.

Developments Gartner expects to perk up sales later in the year include the continued rollout of 3G phones by local and regional manufacturers in China and introduction of handsets in the West based on new versions of Android and Windows, as well as the anticipated introduction of a new iPhone model from Apple.

Samsung was a clear winner during the quarter, Gartner noted. It knocked Nokia off the top spot it has held in the market since 1998, selling 86.6 million handsets and snatching 20.7 percent of the global market. It also regained the title of the world’s number one smartphone maker from Apple, with sales of 38 million units. What’s more, it became the number one maker of Android smartphones, selling 40 percent of the handsets for that platform. No other maker has more than 10 percent of that market, Gartner noted.

During the period, Samsung’s and Apple’s grip on the smartphone market continued to rise, the research firm said. Together, the pair owned 49.3 percent of the market, compared to 29.3 percent during the same period a year ago.

Gartner also reported that the market share of worldwide smartphone sales held by phones based on Google’s Android operating system increased dramatically over the previous year, to 56.1 percent from 36.4 percent.

The smartphone market has become highly commoditised and differentiation is becoming a challenge for manufacturers, Gartner said. “This is particularly true for smartphones based on the Android OS, where a strong commoditisation trend is at work and most players are finding it hard to break the mould,” added Gupta.