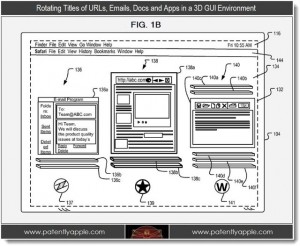 In a few years time, you could be browsing the web in 3D, according to Apple’s new Safari patent applications, which were spotted by Patently Apple on Thursday.

The new patent applications detail a 3D version of Safari, which will allow users to stack bookmarks, emails, documents and applications in a 3D manner.

The patent application describes that the invention relates to: “The presentation and management of Desktop GUIs and opening windows on the desktop GUIs.”

The new technology could enable users to group multiple open windows together, which are then presented in a browsable stack. These stacks could be represented in 3D desktop environment.

When Apple talks about the grouping of stacks, it means each 3D stack will represent a different type of application, such as emails, web browser windows or word processing documents.

The browsing items could be represented in a tilted 3D space, according to another of Apple’s new patents.

“In tilted viewing mode, groups of several consecutive levels of hierarchy can be represented in respective browsable parades shown in different depths into a viewable region of the tilted 3D space,” reads Apples’ patent abstract.