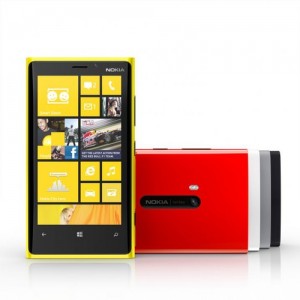 The device, which is the company’s flagship Windows Phone 8 smartphone, has a new start screen and a slew of hardware features supported by the new OS. The Lumia 920 has 4.5-inch WXGA screen and a Qualcomm Snapdragon S4 dual-core processor.

Microsoft announced Windows Phone 8, the successor to Windows Phone 7.5, in June. The updated software supports new hardware features such as integrated NFC (Near Field Communication), which is available on the phone.

The phone includes the new PureView camera, which can capture higher quality images and video than its competitors, said Jo Harlow, executive vice president of Nokia, during the event. The PureView camera can capture better low-light images than rival smartphone cameras, and it can also be used to replace conventional cameras, Harlow said. The camera features image stabilisation.

The phone also has new mapping technology and voice-guided turn by turn navigation. The mapping technology calculates daily commute journeys based on traffic, and will tell users what time they need to leave. Nokia City Lens lets users see images of restaurants, and based on contact information users can touch base with them.

“The Lumia 920 comes in even brighter colors than its predecessors, including red and yellow, which will help the phone stand out in stores, when placed next to the many black ones available today,” said Francisco Jeronimo, research manager at IDC.

Both phones will be available in pentaband LTE and HSPA+ variants and are expected to start shipping in select markets later in the year, according to Nokia. The phone maker will announce pricing and specific roll-out dates country by country when sales are due to begin.

The phones were shown at a press event in New York. Expectations were high for Nokia going into Wednesday’s event, with many expecting the Lumia 920 to be the first Windows Phone 8 device. However, Samsung stole some of that thunder, unveiling the new ATIV S with Windows Phone 8 OS last week at the IFA trade show in Berlin. But the ATIV S has a larger 4.8-inch high-definition display.

The new start screen gives users the flexibility to resize or place more tiles on the front screen. The tiles are more like widgets that get updated in real-time to reflect new information, for example, whether users have received phone calls, emails or text messages. The OS provides the capability for tiles to be small, medium or large. In the start screen, users can also categorise applications, services and Web content under “hubs,” which bunches together information such as social network feeds in a single view. For example, the People hub is updated in real time and can combine contacts, Facebook feeds and other social media feeds in a single view.

The smartphones are essential to Nokia’s survival as it loses market share to the surging Samsung and Apple. Nokia lost its title as the world’s largest smartphone maker to Samsung in the first quarter, and ranked second ahead of Apple in the second quarter, according to Gartner.

During the second quarter Nokia sold around 3.3 million smartphones running Windows Phone to end users, and the overall sale of Microsoft-based smartphones were 4.1 million, according to data from Gartner. That compares to market leader Samsung, which sold 45.6 million Galaxy smartphones during the same period.

Microsoft’s smartphone OS market share was just 1.9 percent in 2011, and is expected to creep up to 3.9 percent by the end of this year, according to Gartner. Microsoft is fifth in the smartphone OS race behind Google’s Android, which held a 46.5 percent market share last year, and Apple’s iOS, which held an 18.9 market share. Symbian and Research in Motion’s Blackberry held the third and fourth spots respectively, but Gartner is projecting Windows Phone to overtake both the OSes by the end of 2013.