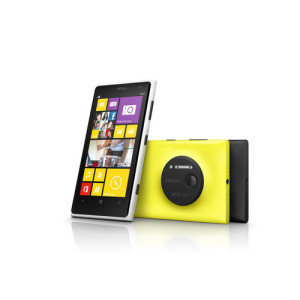 Nokia debuted the latest addition to its Windows Phone line-up on Thursday in the form of the oft-rumoured Lumia 1020, featuring a 41-megapixel PureView camera. The 1020 is the second Nokia handset to come with a monster-sized image sensor after the Finnish phone maker introduced the Symbian-based 808 PureView in early 2012.

The 1020 has been rumored since at least January, but reports about the phone and its specs have been coming fast and furious in the days leading up to Thursday’s unveiling. Even Microsoft Windows Phone chief, Joe Belfiore, got in on the action by tipping the phone via metadata attached to several personal photos posted to Flickr.

The specs
Similar to the 920, the new PureView Lumia features a 4.5-inch AMOLED display with 1280-by-768 resolution at 334 pixels per inch, 32GB onboard storage, and no SD card option. The 1020 also comes with a Xenon flash like its immediate predecessor, the Verizon-exclusive Lumia 928.

Nokia’s new Lumia also comes with 2GB RAM and a Qualcomm Snapdragon S4 processor to help with the heavy-lifting required for all that imaging capability. Other features include NFC, FM Radio, 802.11a/b/g/n Wi-Fi, Bluetooth 3.0, and dual digital high-performance microphones.

About that camera
The Lumia 1020 will come with all the camera features we’ve now come to expect from a Nokia phone, including the aforementioned Xenon flash, and Carl Zeiss optics. The camera will come equipped with six lenses – more than any other smartphone. Nokia opted for an aperture of f/2.2 with the 1020, instead of the f/2.4 fixed aperture on the 808 PureView. The 1020’s main software will also offer a ton of customisable features to help you get that perfect shot. The camera clears up blurry images with a mechanical system of internal bearings that compensate for hand movement in order to produce clearer images.

Nokia is also playing up the 1020’s low-light capabilities thanks to a large backside illumination sensor that increases the amount of light captured by the camera. Nokia showed off a number of example images during the event, and took pains to say these were real photos taken with the 1020. The company landed in trouble last September during the Lumia 920 when it was outed for faking a number of sample images supposedly taken with the 920’s camera.The biggest innovation consumers will take note of is the dual-capture mode that simultaneously captures a 38-megapixel image while creating a 5-megapixel version of the same image for social sharing. The end result is that the user has the ability to zoom in or out of the original image in a way unmatched by other smartphones (as a trade-off, the team at Nokia admits that there is a lag in the processing time of images).

For video, the 1020 offers image capture at 30 frames per second at 1080p resolution. You can also employ a 6x zoom for your home videos, but only at 720p. The 1020 also records stereo sound with deep bass, thanks to the handset’s digital microphones.

Now that Nokia has a new Lumia coming, the big question is will anyone want it? While Nokia has seen modest success with its Windows Phone devices in other parts of the world, it has struggled to gain adoption in North America.