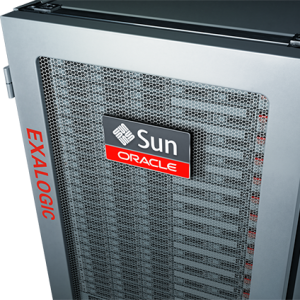 Oracle is planning to discuss how its Exalogic application server machine is “the logical choice” for running applications, during a special webcast event on Wednesday.

Exalogic was introduced by Oracle CEO Larry Ellison as “one big, honkin’ cloud” during 2010’s OpenWorld conference. It’s also been referred to as a “cloud in a box.”

The system combines Oracle’s Sun servers with networking equipment and storage along with a stack of software, including WebLogic Server and Elastic Cloud Software 2.0, a recently released update.

Oracle had already claimed Exalogic provides vast performance improvements for Java applications. But Elastic Cloud 2.0 raises the bar set in version 1.0 by a factor of three, according to an official Oracle document.

It also includes advancements for consolidation and system management, such as Oracle Traffic Director, a load-balancer optimised for Exalogic.

Both Tuxedo and Oracle’s Coherence in-memory data grid now run faster on Exalogic thanks to improvements in its Infiniband-based Exabus “networking fabric,” according to Oracle.

Executives are also expected to discuss Wednesday how Exalogic machines can be managed, proactively monitored and patched through Oracle’s Enterprise Manager toolset.

While the Exadata database machine was the first and remains the highest-profile “engineered system” Oracle sells, Exalogic figures prominently in its plans as well.

Exalogic, along with Exadata, is used in the data centres supporting Oracle’s recently introduced Cloud service. The vendor is also positioning the two platforms as an ideal way for customers to run Oracle applications in-house, particularly while consolidating many smaller workloads that may now be running on disparate systems.

To the latter end, Oracle is pairing up Exalogic with its Tuxedo middleware for mainframe rehosting. A launch event for Tuxedo version 12c is scheduled for later this month.