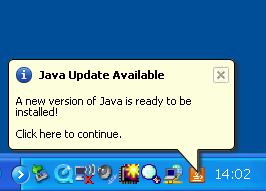 According to a company blog post, Oracle is due to release another batch of patches for Java SE on February 19.

On February 1, Oracle pulled the trigger early on the February release, which had originally been scheduled for February 19, due to a serious vulnerability that affected Java at the browser level.

As a result of the sped-up release, Oracle didn’t manage to include a “small number” of fixes that had been planned for inclusion, according to the blog.

Critical patch releases for Java SE are cumulative in nature, meaning that any user who didn’t apply the group released on February 1 will get everything at once in the February 19 batch, according to the post.

The patch set released on February 1 contained 50 fixes, including 44 for vulnerabilities at the browser level. It wasn’t clear on Friday how many more will be added to the set later this month.

Oracle has come under fire lately over Java, not only regarding vulnerabilities but also the fact that Java updates include third-party software, or as some critics call it, “crapware,” such as the Ask.com toolbar.

An online petition asking Oracle to stop the practice had garnered more than 10,000 signatures as of Friday.

Users can opt out of installing the software, however.

Oracle’s head of Java security also recently made a public pledge that Oracle will “fix” Java as well as be more open and regular with its communications around the language.