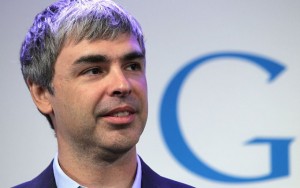 Google CEO Larry Page tried to put a positive spin on his company’s poor third-quarter financial results, which were released prematurely Thursday and triggered a panicked stock sell-off before trading was abruptly halted.

During a conference call with financial analysts, Page said the quarter had been a strong one and that Google has big opportunities for growth, especially in mobile advertising.

“As we transition from one screen to multiscreens, Google has enormous opportunities to innovate and drive ever higher monetisation,” Page said, referring to the popularity of smartphones and tablets.

To back up his claim, Page said that Google’s annual run rate of mobile-related revenue is US$8 billion, mostly composed of ad sales but also containing revenue from the purchase of content, like books, movies and music, and of applications on the company’s Play store.

“That’s quite a business,” he said.

The seed for this was planted back in 2005 when Google launched its Android mobile OS, he said, adding that there are now half-a-billion Android devices worldwide, and that 1.3 million are activated daily.

Still, it was a strange, convulsive day for Google, whose printing service provider RR Donnelly mistakenly released the company’s financial report hours early, delivering bad news to investors in the middle of the trading day.

Google’s revenue grew, but earnings dropped and the company missed Wall Street expectations, unleashing a massive sale of the stock. When trading on the Nasdaq was halted shortly before 1 p.m. Eastern Time, its shares were trading down a little more than 9 percent.

The stock resumed trading shortly before the close of market and ended the day at $695.00, down 8 percent.

Google took in revenue of US$14.10 billion for the quarter, ended Sept. 30, up 45 percent year on year. Subtracting commissions and fees paid to advertising partners, revenue was $11.33 billion, below the consensus expectation of $11.86 billion from financial analysts polled by Thomson Financial.

Google was affected by a combination of heightened costs and weaker ad prices.

In addition, the commissions and fees Google pays to partners, known as Traffic Acquisition Costs (TAC), increased to $2.77 billion from $2.21 billion.

Meanwhile, Motorola Mobility, whose $12.5 billion acquisition Google closed in May, had an operating loss of $527 million on revenue of $2.58 billion. In addition, restructuring and related charges recorded in the Motorola business were $349 million, and the related tax benefits were $76 million.

Other Google executives joined Page in singing a happy tune, including CFO Patrick Pichette, who said he was pleased with the business’ “growth trajectory.” Pichette said Google’s numbers were also adversely affected by “currency headwinds.”

Google is hard at work at improving its mobile advertising technology, Page said, in part to make it much easier than it is today for marketers to manage their mobile ad campaigns.