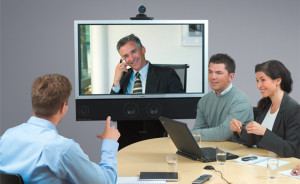 Polycom has released survey results which show that video-conferencing is on the rise, and the Middle East’s main use of it is powered by flexibility.

In conjunction with Redshift Research, the survey of 1,205 business decision makers in 12 countries showed that video conferencing was ranked third (47 percent) after e-mail (89 percent) and voice/conference calls (64 percent) as the most preferred method of communication today.

However managers expect video to be their most preferred collaboration tool in three years (52 percent), followed by e-mail (51 percent) and voice/conference calls (37 percent).

“The growing popularity of video conferencing at home, especially by millennials entering the workforce, is a big driver of increased preference for and adoption of video collaboration in the workplace,” said Jim Kruger, EVP and Chief Marketing Officer, Polycom.

“Some key factors to making video as popular in the office as it is at home is ensuring it’s easy to use, providing a high quality connection, delivering enterprise-grade security, and participants’ willingness to accept and adapt to cultural differences as they communicate across borders.  We’re seeing businesses around the world defy distance every day using video collaboration, including increasing productivity, enhancing employee engagement, improving time to market and helping to save lives.”

In the Europe, Middle-East and Africa (EMEA) region, respondents were mostly using video conferencing to empower flexible working environments, which was cited as the second highest reason for using the technology, after “connecting with colleagues across the country.”

The IT and manufacturing/supply chain functions are most likely to use video collaboration for international meetings, with 61 and 58 percent of respondents respectively, saying they use or would use video to collaborate face to face with colleagues internationally.