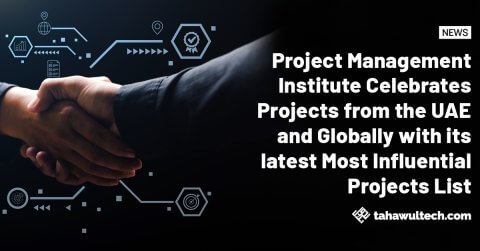 Today, Project Management Institute (PMI), the world’s leading organisation for the project management profession, announced its fourth annual list of Most Influential Projects showing the top 50 influential projects of the past 12 months. The Top 50 List includes two prestigious projects from the United Arab Emirates – Emirates Crop One and Store of the Future.

Emirates Crop One is a US$40 million joint venture between ag-tech start-up Crop One Holdings and Emirates Flight Catering. Emirates Crop One claims the title of world’s largest vertical farm. But the team has bigger ambitions than mere size—it uses an AI-powered closed-loop water recycling system capable of growing 907,185 kilograms of fresh produce annually, with 95 per cent less water than field-grown fruits and veggies.

Store of the Future located in the Mall of the Emirates in Dubai, delivers a deeply immersive experience. Equipped with next-gen sensors, cameras, and AI tech, welcoming each guest and collecting data throughout their journey to respond with customised recommendations and interactions.

The list, which made its debut in 2019 in honour of PMI’s 50th anniversary, highlights compelling projects around the world and across industries that achieved significant milestones and transformed their sectors. The list highlights the progress project teams have made on innovative projects in education, climate action, architecture, technology, healthcare, and more.

The 2022 Most Influential Projects list proves how project managers can make this happen – even in the most challenging of times. The PMI® 2022 Global Megatrends report identified six megatrends reshaping every corner of the globe that continue to have an impact on both business and how we live — from digital disruption and climate change to movements for equality. As organisations develop ideas to mitigate their negative impacts, they have long turned to project managers to help them turn these ideas into reality.

“At PMI, we believe that excellence in project execution is critical in meeting today’s challenges and opportunities”, said Pierre Le Manh, President, and Chief Executive Officer of Project Management Institute. “This year’s Most Influential Projects demonstrate the power of projects – and the project professionals behind them – to drive impact and shape our future”.

Members of the project management community—including experts, volunteers, academics, and industry leaders from across the globe—provided input and nominations for this year’s list. The pool of candidate projects, which numbered in the thousands, was then vetted by a PMI thought leadership team. The final list reflects how PMI envisions projects: as powerful forces in creating change, reaching goals, and solving problems. The project professionals and teams behind these projects are empowered individuals who creatively solve problems, help cross-functional teams work together, and shape the future of their organisations and communities alike.

Honourees include momentous triumphs, such as reimagining the modern workforce to meet the demands of employees and employers; envisioning the most complex and powerful telescope ever built; and countering urban sprawl while elevating affordable housing options. This list also includes highly impactful, but lesser-known victories such as Battersea Power Station Regeneration and Orca. Additionally, PMI curated 30 lists recognising the Top 10 Most Influential Projects in a variety of regions and industries. In total, the lists include more than 200 breakthrough efforts across a wide range of industries and geographies.

The Top 10 Most Influential Projects in the MENA region: *

Visit the MENA Region’s Top 10 Most Influential Projects List here and the Global list can be found here.

*All product names, logos, and brands are the property of their respective owners.

To view the complete list of projects and industry- and region-specific “Top 10” lists, visit https://www.pmi.org/most-influential-projects-2022. For more information or to nominate a project for 2023 Most Influential Projects, please email your submission to MostInfluential@PMI.org.