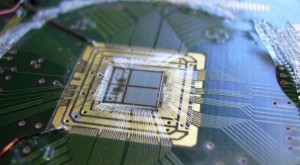 The company wants to load mobile devices with its Zeroth processor, which is being designed to mimic a human brain, Jacobs said, during a speech at the company’s annual investor meeting in New York. The chip can learn human patterns and anticipate actions, which could make interaction with mobile devices easier.

“This is the beginning of devices that are smart,” Jacobs said. “It is a far-out research project, but it works.”

The Zeroth chip is designed around neural systems and mimics the brain’s structure and operation through circuitry and algorithms.

Brains are “low-power, highly parallel systems,” Jacobs said. “The size of a brain is one aspect of learning capacity, so Qualcomm will build smaller brains for smaller devices, and larger brains for larger devices,” he said.

Qualcomm’s Snapdragon chips are used in many of the top smartphones and tablets.

The Zeroth chip can rewire to sense, understand and act on input from information sources. Qualcomm has already shown a robot equipped with Zeroth that was able to make correct decisions based on progressive learning and input.

“Instead of preprogramming behaviours and outcomes with a lot of code, we’ve developed a suite of software tools that enable devices to learn as they go and get feedback from their environment,” wrote Samir Kumar, Qualcomm’s director of business development, in an October blog entry explaining the Zeroth processor.

This is not the first effort to reverse-engineer the brain into silicon. IBM is trying to develop a neuromorphic chip through its SyNAPSE program and demonstrated a prototype chip in August 2011. Intel has also proposed a neuromorphic chip design. The Human Brain Project, funded by the European Union, aims to recreate the spiking neurons and synapses phenomena in brains on silicon chips within a power budget of 1 watt.

Even now, phones are learning a lot based on patterns, Jacobs said, but Zeroth chips could help build more sophisticated devices.

“We are investing in a lot of cool technologies,” he said.