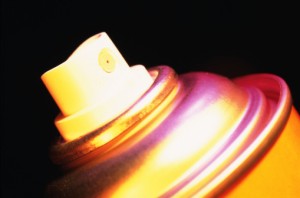 Researchers at Rice University in Houston have developed a prototype spray-on battery that could allow engineers to rethink the way portable electronics are designed.

The rechargeable battery boasts similar electrical characteristics to the lithium ion batteries that power almost every mobile gadget, but it can be applied in layers to almost any surface with a conventional airbrush, said Neelam Singh, a Rice University graduate student who led a team working on the technology for more than a year.

Current lithium ion batteries are almost all variations on the same basic form: an inflexible block with electrodes at one end. Because they cannot easily be shaped, they sometimes restrict designers, particularly when it comes to small gadgets with curved surfaces, but the Rice prototypes could change that.

“Today, we only have a few form factors of batteries, but this battery can be fabricated to fill the space available,” said Singh.

The battery is sprayed on in five layers: two current collectors sandwich a cathode, a polymer separator and an anode.

“It was difficult optimising the components in the form of a paint,” said Singh. Initial versions were sensitive to moisture and would peel off, but the addition of a polymer and a heat-sealing step solved this problem.

The result is a battery that can be sprayed on to plastics, metal and ceramics.

In an experiment, Singh’s team airbrushed a battery on to nine ceramic bathroom tiles. Each tile represented one battery cell and they were charged with a small solar cell. Connected in parallel, the battery was able to power for six hours a set of LEDs (light-emitting diodes) that spelled out the word “RICE.”

With patents filed on the process, the team is now looking to further refine the process.

“The present work is just a concept of paintable batteries,” said Singh. “We chose the materials to match those being used in lithium ion batteries, but we are talking about non-experts making them at home with safer materials.”

They are also hoping to attract interest from electronics companies, which Singh estimates could put it into production relatively easily.