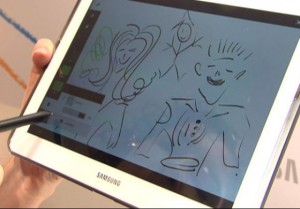 Samsung has introduced the Galaxy Note 10.1, a new stylus-based tablet, which it claims is more interactive than the market-leading Apple iPad.

“We are going to redefine tablets. People like to lean back to surf the Web. We all love doing that, but we think something is missing. What if there was a tablet to release your creativity? What if there was a tablet that made writing personal? That tablet is here,” said Tim Baxter, president of Samsung Electronics America, at the U.S. launch event.

Unlike the Samsung Galaxy Tab series of tablets, the Samsung Galaxy Note 10.1 comes with a stylus-like device, which provides more nuanced control of applications, the company said. Although it resembles a stylus, the S-Pen actually interacts through the screen through radio waves, allowing for a much more exact placement of the pen’s tip.

The company claims that the device’s screen can recognise 1,000 different levels of pressure sensitivity, which means the device can more accurately capture and portray what the S-Pen is doing on the screen. The device also is smart enough to ignore the user’s palm should it accidentally rest on the screen.

The tablet also comes with a notepad application, called S-Note, that exploits the capabilities of the S-Pen. S-Note provides a surface for users to write or draw on, with a number of features to help sharpen the material being placed on the screen. It can match shapes and remove excess scribbles, and also recognise words and even mathematical formulas. It can convert handwriting to text and search on highlighted phrases.

The Galaxy Note 10.0 also comes with a customised copy of Adobe Photoshop Touch, allowing users to do fine-grained, professional-quality photo editing. In a series of demonstrations, a Samsung representative showed how this touch edition of Photoshop replicated much of the functionality of Photoshop’s desktop version– including the ability to change the background of an image and execute standard retouching effects, such as the removal of blemishes from a person’s face.

This device can also help ease content creation by offering what Travis Merrill, director of United States Galaxy marketing, called true multitasking. Other tablets multitask only in that they allow users to “toggle” between different apps, an approach Merrill called “single tasking.” “You are really only doing one thing at once,” with such tablets, Merrill said.

The Note 10.1 is unique in that its screen can display two applications at once, allowing the user to cut and paste material between the apps.

Such multitasking could be used to execute many tasks that would be prohibitive using non stylus based devices, suggested Samsung vice president and head of global marketing Younghee Lee, who also spoke during the launch presentation. For instance, a user can take notes while reading a book. Or, a user can look up some information while watching a movie. Or one could copy an address from an online magazine onto the notepad. Or a user could draw a picture based on some image being displayed on the screen.

The tablet also comes with universal television remote software and it even offers recommendations based on previous TV viewing habits.

The tablet has a 10.1 inch (25.6 centimetres) screen, runs on a quad-core Samsung 1.4Ghz processor and has 2GB of RAM. The units will feature 16 GB, 32GB or 64GB of internal storage. The Note runs the Ice Cream edition of Android, but will be upgraded to Jelly Bean in the near future.

More specifications: The WXGA LCD display is 1280 x 800 and can play 1080p high definition video. It includes a 5 megapixel auto-focus camera on the back and a 1.9 megapixel camera on the front. The device weighs 1.31 lbs (453 grams). It connects to the Internet through WiFi direct or WiFi channel bonding, and also has Bluetooth 4.0 connectivity. Samsung claims this device’s battery life can support up to around 9 hours of use.

Samsung sells the most Android-based smartphones, with 64 percent market share among all Android phone suppliers, Gartner recently said. During her presentation, Lee noted that Samsung has sold over 10 million Galaxy Note devices.