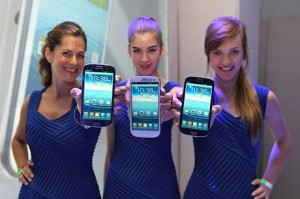 Samsung Electronics said its operating profit nearly doubled in the fourth quarter, on strong sales of high-end smartphones and the growth of its processor business for mobile devices.

The world’s largest handset, memory chip and TV maker reported an estimated operating profit of 8.8 trillion won (US$8.2 billion) for the October-December period, up from 4.66 trillion won a year earlier. Its estimated revenue was 56 trillion won in the quarter.

The South Korean company released the numbers as part of its preliminary earnings report, with its actual results due on Jan. 25.

Samsung’s mobile business is expected to stay strong at least until the second quarter of 2013, as it plans to roll out new high-end smartphones. In addition, rising demand for mobile application processors should boost the operating profit of its semiconductor division 47 percent in the fourth quarter from a year ago, according to Jeff Kang, an analyst with Daishin Securities in Seoul.

High-end smartphone sales, however, may slow due to the overcrowded global market, and new models could have an impact on Samsung’s previous flagship handsets. But analysts still praised the company’s diversification.

“Because the high-end market is saturating, Samsung has no other option but to pursue other market shares in low- and mid-end market, and the strategy will prevail,” said Marcello Ahn, an analyst with Nomura.

Sales of the Galaxy S3 probably fell about 17 percent in the quarter from a year ago, but shipments of the larger Galaxy Note 2 could reach between 8 and 9 million as it is being sold in more countries than its predecessor, Ahn said.

The next in Samsung’s Galaxy series, the S4, may disappoint “aggressive market expectation” as it won’t use the company’s widely anticipated flexible plastic display technology. The displays may take another year for the company to commercialise.

Samsung shipped about 62 million smartphones in the fourth quarter, which contributed more than half of total handset sales, Kang said in a research note. Tablets also exceeded expectations, with about 7 million shipping in the quarter compared to 5 million in the third quarter.