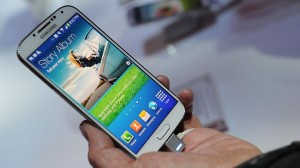 Of the top-selling smartphones in the past year, customers ranked two Samsung smartphones higher than the last three Apple iPhone models.

The latest American Customer Satisfaction Index, released Wednesday, ranked both the Samsung Galaxy S III and Galaxy Note II at 84 out of 100 — the highest rankings in the group. The results for the Samsung phones compare to ratings of 82 for both the iPhone 5 and iPhone 4S, with an 81 for the iPhone 4.

The new Samsung Galaxy S4 wasn’t included because the survey was complated just prior to its launch by the major U.S. carriers in April.

While the top two ranked smartphones are Samsung devices, the latest iPhones aren’t far behind. Still, the difference is another indication of Apple’s fading dominance in smartphone customer satisfaction.

Apple’s iPhone was the top ranked smartphone in the May ACSI index, at 81, but while overall satisfaction with all Samsung phones rose 5% to 76, tied with Nokia phones and just behind Motorola phones at 77. Individual phones were not rated in that May index.

The ASCI ratings for July were based on a survey of 4,112 users between Jan. 21 and March 17. The study released today is an update and expansion of the May study, which surveyed more than twice as many customers.

David VanAmburg, ACSI director, noted in a statement that iPhone customers don’t see that much difference in satisfaction between the iPhone 4, 4S or 5. At the same time, Samsung customers showed a marked difference in their satisfaction rank for the different models, ranging from the Galaxy S II (rated 78), which was released in 2011, to the Galaxy S III (rated 84), released in 2012.

“If the Galaxy S4 performs well–or even better–in the eyes of customers, Samsung could threaten Apple’s dominance in overall customer satisfaction,” VanAmburg said.

Apple only sells smartphones, while Samsung sells both feature phones and smartphones.

ACSI also noted that BlackBerry continues to “stay firmly entrenched at the bottom of the industry in customer satisfaction.”