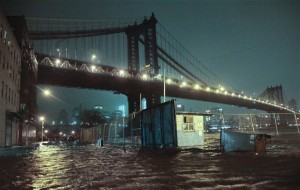 Post-Tropical Cyclone Sandy knocked out mobile, phone and cable service in many parts of the eastern U.S. on Monday, with about one in four cell sites affected in the hardest-hit band of the country between Virginia and Massachusetts, according to an FCC estimate.

About 25 percent of the cell sites in the 10-state area were out of service at 10 a.m. Eastern on Tuesday, the U.S. Federal Communications Commission estimated. Due to the floods, high winds and snow brought by the storm, there were reports of outages as far west as Michigan, the agency said. The situation could become worse in some areas as backup power supplies for affected cell sites run out, it warned.

Service providers were still evaluating the effects of the wide-ranging storm late Tuesday. Verizon Communications said more than 200 of its wireline facilities were running on backup power. “Although we will be working with all available resources to restore service for our customers, some pockets of damage are extensive and could take up to a week or more to fully restore,” Bob Mudge, president of Verizon’s Consumer and Mass Business division, said in a press release.

Verizon Wireless said 94 percent of its cell sites in the Northeast were up and running and all its switching and data centres were functioning normally. But extensive flooding in the hardest-hit areas, including Lower Manhattan and parts of New Jersey, caused problems for both wireline and wireless carriers. Power outages also affected service, and in some cases carriers were waiting for electric utility crews to finish their work.

“The storm surge from Hurricane Sandy has resulted in flooding at several Verizon Central Offices in Lower Manhattan, Queens, and Long Island causing power failures and rendering back-up power systems at these sites inoperable,” Verizon Communications said in the release. “While these sites are currently on battery power, the inevitable loss of power requires that all equipment at these sites be powered down to prevent damage.” Customers served by those central offices lost all FiOS, DSL (digital subscriber line) and wireline voice service, Verizon said.

“We’re still largely in assessment mode,” Verizon Communications spokesman Alberto Canal said. In Lower Manhattan, “We can’t get in there to do work until the power companies do their work. It’s still very early,” he said.

“Some of our strike-team crews are out, and they are working to restore service where they can get access,” Davis said. “Right now, it’s basically a safety and an access issue.”

Sandy has affected most of the East Coast, all the way from North Carolina north to Maine and Canada. Service in some areas may be restored more quickly than those in the band hit hardest by the storm.

“Every area has different impacts and different damage, so it’s too early for us to tell when we’re going to have everything up and running for every part of the country that’s been affected,” Sprint’s Davis said.

AT&T also said its network had problems in areas hit heavily by the storm.

“We are in the initial stages of performing an on-the-ground assessment of our network for damage, and crews will be working around the clock to restore service. We are deploying personnel and equipment as soon as it is safe to do so,” the carrier said in a statement. T-Mobile USA also said some of its customers might experience service disruptions in some areas and its engineers were assessing the situation as quickly as possible.

Cable service was also hit. “At this time it appears most issues are directly related to commercial power outages, and for the majority of people, their Comcast service should be restored as power comes back on to their homes,” Comcast said in a statement.