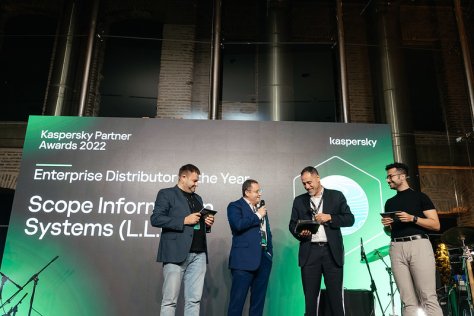 The VAD announced that it has won the following awards from Kaspersky at the recently concluded events: –

Commenting on winning the awards, Fadi AbuEkab, CEO and Founder, SCOPE Middle East said, “We are thrilled to receive these prestigious awards from Kaspersky. For the past 2 decades, we have worked hard to create one of the strongest distribution and channel partner networks in the Middle East region, it has always been our endeavour to offer innovative technologies that meet the needs of enterprises in the region”. He went ahead to congratulate Heba Sirriyeh and SCOPE Team in Saudi Arabia and LEVANT for winning the ‘Channel Person of the Year 2022’ Award and the entire SCOPE Middle East Team for bringing the awards home.

Kaspersky products are regularly assessed by independent experts – and have won numerous industry awards, plus recognition from leading industry analysts, including Forrester recognising Kaspersky as a Leader in the Forrester Wave with the Kaspersky Threat Intelligence services.

SCOPE’s Regional Sales Director for LEVANT and Saudi Arabia region, Heba Sirriyeh expressing her gratitude while receiving the awards and said “We are privileged to win these awards that reflects our commitment to represent the very best the industry has to offer for the region. This award is also a recognition for the hard work and efforts of our team and channel partners”. She also thanked Kaspersky for the continued support and attributed the success to working as a family with all stakeholders and looking forward to more fruitful business in the future.