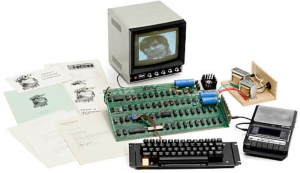 One of only a handful of 37-year-old, still-working Apple-1 computers sold for a record three-quarters of a million dollars Saturday at an auction in Germany.

The record price was paid by an anonymous bidder. In an interview with the New York Times, Auction Team Breker of Cologne, which sold the Apple-1, said the buyer was a “wealthy entrepreneur from the Far East.”

That eclipsed the $640,000 record for an Apple-1 established last November at an auction also conducted by Breker, and was nearly double the upper estimate of approximately $390,000 set by the auctioneer earlier this month.

The two Apple-1s sold by Breker in November and on Saturday were in working condition, a rarity for the nearly-four-decade-old computer. Experts believe that there are only six operational Apple-1 computers remaining, and just an estimated 50 or so that have survived in all.

The Apple-1 that sold yesterday, like each of the approximately 200 made, was a simple circuit board hand-built by Apple co-founder Steve Wozniak in 1976. Buyers had to provide their own power supply, keyboard and monitor. At the time, an Apple-1 sold for $666.66, equivalent to $2,724 in today’s dollars, or almost as much as a current 15-inch MacBook Pro with a Retina-quality display.

Included with the Apple-1 was the original manual and a January 19, 1978 letter signed by co-founder Steve Jobs. In the letter, written to the Apple-1’s original owner, Fred Hatfield, a retired electrical engineer who now lives in Louisiana, Jobs offered to exchange Hatfield’s Apple-1 for an Apple II 4K motherboard if Hatfield ponied up another $400. Hatfield declined.

The Apple-1 circuit board had also been signed by Wozniak.

While the price paid was a record, it was no surprise that it sold for hundreds of thousands.

Earlier this month, Mike Willegal, an engineer with a major technology company who has identified 41 Apple-1 computers, observed that the Hatfield system had been restored to working order. “It seems like the European auctions seem to be gathering the highest bids, so it may well reach its estimated value,” Willegal said at the time in an email.

Willegal was referring to past auctions in Europe, including the $640,000 Apple-1 sale by Breker in November and a then-record $374,500 for another working Apple-1 sold by Sotheby’s in June 2012.