Sony and Panasonic said Monday they will team up to create mass production technology for super-high resolution TVs based on OLED technology, in a concerted effort to drive mainstream adoption and revive their struggling television businesses.

The companies aim to develop an effective way to print large panels that use OLEDs, or organic light-emitting diodes, by next year, they said in a statement. They signed an agreement Monday that includes sharing their technology and jointly researching mass production techniques.

TVs based on OLEDs are widely seen as superior to those using the LCD technology that is the standard today, but they are still very expensive to produce. OLEDs produce their own light, meaning they don’t require backlights as with LCDs, so they can display darker blacks and use less power, as well as providing better contrast and brightness in a thinner form factor.

Theoretically OLEDs can also be manufactured more efficiently, as they can be printed straight onto a base material, while the liquid crystal in LCDs is generally injected into tiny pockets. OLED screens are now widely used in phones and tablets, but for TVs cheap mass production looms as a major obstacle, as OLED sets currently cost many times their traditional LCD peers. 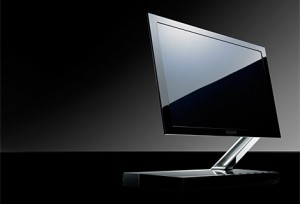 Sony launched the world’s first OLED TV in 2007, an 11-inch model that was just 3 millimeters thick at the screen and wowed consumers but cost over US$2,000. This year Korean makers Samsung and LG electronics have showed super-thin 55-inch models, with Samsung saying its TV will go on sale during the second half of this year in Korea for about US$9,000. Similarly-sized LCD models from Samsung cost about a fifth of that.

Both Sony and Panasonic booked record losses last fiscal year as costs mounted in their TV businesses, with prices for LCD sets plunging in a largely commoditised market. Both companies have said they will not abandon the flagship product, though efforts to revive sales through features like 3D and networked services have yet to generate profits.

Sony said it will contribute its knowledge and research into OLEDs up until now, while Panasonic, which also makes plasma TV sets, said it currently has production equipment and know-how that should be applicable to large-screen OLED screens.

In addition to traditional flat screens, OLEDs can be applied to many different substrates, making curved and even flexible or rollable screens possible.