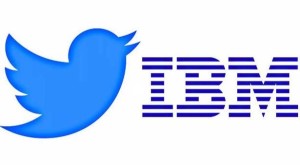 IBM and Twitter have announced a partnership that will merge Twitter’s massive flows of social media data with Big Blue’s analytics software, including Watson.

The partnership will involve three major components, according to Wednesday’s announcement. First, IBM will use Twitter data streams for cloud services such as Watson Analytics, Watson Developer Cloud and its Bluemix platform-as-a-service.

Finally, IBM’s consulting arm will work along with Twitter on industry-specific products for areas such as retail, banking and travel.

“I use Twitter as a sort of market-intelligence radar,” said Alistair Rennie, General Manager, Business Analytics, IBM, in a blog post Wednesday announcing the deal. “I follow very smart people to see what they’re reading and thinking. Now, for the first time, business leaders will be able to tap into the Twitter stream in powerful new ways to harvest insights that help them understand customer sentiment more deeply, develop hit products and services, and anticipate sudden shifts in moods and markets.”

Rennie’s contention that this is the “first time” such a thing is possible is an overstatement, given that many analytics vendors have already integrated with Twitter’s “firehose” of tweets.

But Wednesday’s announcement does reflect IBM’s drive to align its technologies with consumer-centric companies, coming just a few months after it formed a major partnership with Apple.

In turn, the pact represents a pivot by Twitter more directly into the enterprise IT world.

The IBM deal “has been years in the making,” starting when Twitter first made its tweets available to be analysed, Twitter said in a blog post.

Twitter’s April purchase of Gnip – a vendor that had built a business around wrangling and filtering social data from Twitter and other sources – was “an important milestone,” the post added.

“[Gnip] gives us an enterprise-grade platform that delivers more than 15 billion social activities per day to a vibrant ecosystem of customers and partners who are innovating using this data,” it states. “As a result, we have a strong platform for data that makes our relationship with IBM possible.”

Companies have long used Twitter data to monitor what customers are saying about their products and services. However, the tie-ins to IBM technology will allow for much more sophisticated scenarios, such as asking “multi-variable, pattern-dependent questions like ‘What do customers like best about my products?’ or ‘Why are we growing quickly in Brazil?'” Twitter said.