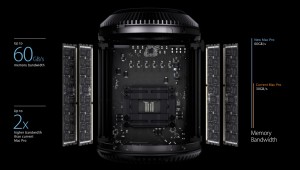 Apple senior vice president Phil Schiller’s in-your-face statement essentially sums up what Apple thinks of the new Mac Pro, unveiled during a “sneak peek” at the Worldwide Developers Conference on Monday. Apple’s new desktop workstation isn’t just a powerful machine for the most demanding users; it shows that the company still takes the Mac and its product design seriously.

Apple’s new desktop workstation features a sleek, cylindrical design that’s a stark contrast to the mammoth, roomy aluminium tower initially introduced with the Power PC-based Power Mac G5 in 2003, and revised with the release of the Intel-based Mac Pro in 2006. Apple didn’t announce a formal ship date, stating that the new Mac Pro will ship later this year, nor did it talk about pricing or specific models. It will be made in the United States.

What the new Mac Pro has
The new 9.9-inch tall Mac Pro case is about one-eighth the size of the Mac Pro tower. The entire top of the Mac Pro is a handle for carrying, and motion sensor lights show the I/O ports. The new design, according to Schiller, is based around a “unified thermal core” to help keep the machine cool.

Apple didn’t just rely on the stunning, jaw-dropping design of the new Mac Pro for its sneak peek. Schiller offered a lot of specifics as to what’s under the hood.

At the heart of the Mac Pro is a Xeon E5 processor, which is based on Intel’s Haswell microarchitecture and introduced by the company last April. Configurations with 12-cores will be available, and all Mac Pros will use third-generation PCI Express architecture. Apple is also using 1866MHz ECC DDR3 RAM.

The Mac Pro is designed for speed, and Apple is outfitting the machine with PCIe-based flash memory, not traditional SATA hard drives or solid-state drives. Apple touts speeds of 1.25 GBps for reads and 1.0 GBps for writes. The company did not give specifics as to the amount of storage available.

What the Mac Pro is missing
The new MacPro will have Thunderbolt 2, the newest iteration of Intel’s Thunderbolt technology that supports data rates of 20 gbps. Thunderbolt 2 will be a critical technology for new Mac Pro users – it will provide connectivity for legacy devices.

The most remarkable change with the Mac Pro is the elimination of expansion slots. The previous Mac Pro had a pair of 16-lane PCI Express 2.0 slots and a pair of 4-lane PCI Express 2.0 slots. For current owners who have filled their Mac Pro’s slots and still need to use their cards, you’ll have to invest in an external Thunderbolt expansion chassis that will house expansion cards and connect to the new Mac Pro via Thunderbolt.