The Hope Probe will carry with it the UAE Nation Brand’s logo and its accompanying slogan, ‘Make it Happen’, when the spacecraft built by the Mohammed bin Rashid Space Centre takes off for Mars later this year, according to WAM. 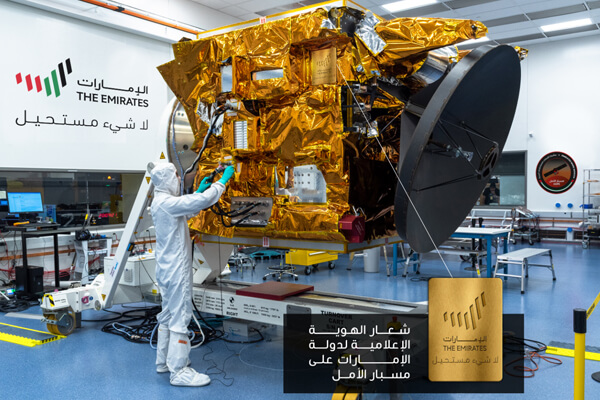 The brand’s placement on the probe, called ‘Al-Amal’ in Arabic, symbolises the future-forward aspirations that the new brand represents.

The UAE Nation Brand was designed by seven Emirati artists from each emirate and represents the map of the UAE through the seven lines designed in the colours of the national flag. The ‘Seven Lines’ design also represents the seven beacons, seven founders and seven pillars that convey the ambitions of the UAE’s visionary leadership and its people.

The brand, which was voted for by more than 10.6 million people worldwide, reaffirms the notion that the UAE’s ambitions are limitless, that the word ‘impossible’ is not in the nation’s vocabulary. This message of aspiration and pathfinding for future generations will be emblazoned on both the Hope Probe spacecraft and the rocket that will carry it.

Dr. Ahmad bin Abdullah Humaid Belhoul Al Falasi, Minister of State for Higher Education and Advanced Skills and Chairman of the UAE Space Agency, said, “Attaching the UAE Nation Brand to the Hope Probe is a celebration of the scientific milestones that the men and women of the UAE, from engineers and scientists to technicians and mathematicians, have achieved. It is also a clear symbol of our pride in this landmark national project that is considered the greatest Arab project in the field of space exploration.

“The UAE Nation Brand evokes our nation’s capabilities, its efforts to become a leading modern, ambitious people that has the trailblazing foresight and vision to drive the future world forwards,” he added.

Sarah bint Yousif Al Amiri, Minister of State for Advanced Sciences and Emirates Mars Mission Deputy Project Manager, said, “The Emirates Mars Mission, set to be the first probe to provide a complete picture of the Martian atmosphere, is the pinnacle of the UAE’s rapid scientific development. Its design and construction are a testament to the UAE’s admirable efforts to plan for the future, and reflects an inspirational national identity we are all immensely proud of.”

She further noted that the Hope Probe is proof that nothing is impossible and that all dreams are achievable, as long as we are blessed with a leadership that always wants the best for its people.

“By attaching the UAE Nation Brand to the Hope Probe we are showing that the essence of our identity, principles, objectives and actions are not bound by earthly limitations; we are capable of going to space and back. We have built a nation that does not think there is such a thing as ‘impossible’, as we forever etch the UAE’s name into the history books of space exploration, as we become the first Arab country to go to Mars,” she said.

The UAE Government had announced that the Hope Probe, which is the core of the Emirates Mars Mission, will be launched in July 2020. It is expected to reach Mars in the first quarter of 2021, to coincide with the nation’s Golden Jubilee Year.

The Hope Probe will be launched from the Tanegashima Space Centre, TNSC, in Japan, where it will be transported in a rocket similar to those used to launch satellites into space. It is expected to take the Hope Probe seven to nine months to arrive at the Red Planet.

The Hope Probe will become the first to provide a complete picture of the Martian atmosphere and its layers when it reaches the red planet in 2021. The spacecraft is also expected to collect more than 1,000 GB of new data on Mars – this first-of-its-kind data collection will then be stored at a specialised national data centre, where technical teams will analyse it, before it is shared for free with the global scientific community.